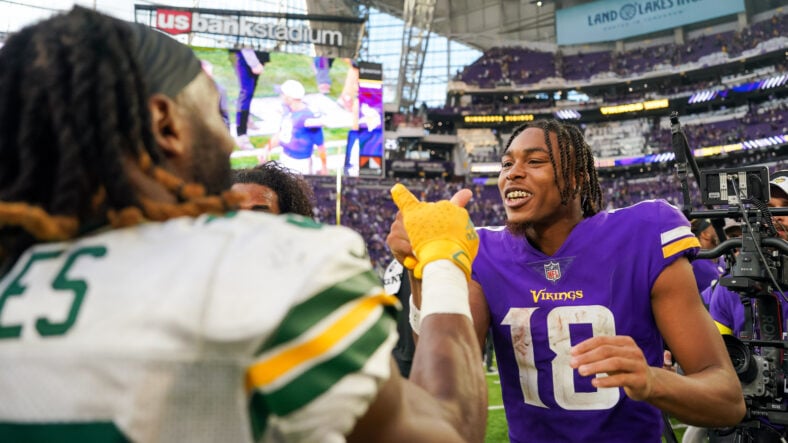 Each week, VikingsTerritory tracks the Minnesota Vikings odds of reaching the postseason, starting with pre-Week 1 all the way to Week 18.

Various probability sources are tracked and centralized in one spot for reference.

This is the Vikings probability meter before Week 2 against the Philadelphia Eagles.

You blinked, and the Vikings became Super Bowl contenders. This occurred overnight from Sunday to Monday. That’s how important it was for the purple team to subdue the green franchise.

The site is also still curiously high on the Indianapolis Colts, which is odd after Matt Ryan’s crew tied the underwhelming Houston Texans.

This climbed tremendously and is fruit of beating the Packers. The Vikings kicked the primary foes in the shins — and it mattered.

According to its math, Football Outsiders careened the Vikings playoff probability by 13.5% after a single game. Wowzers.

The Vikings playoff moneyline transferred from -115 to -225. Like FiveThirtyEight and Football Outsiders, the seesaw was rocking. Minnesota now has similar odds to reach the postseason as Kevin O’Connell’s former team, the Los Angeles Rams.

Stressing it again, the Vikings triumph in Week 1 over the Packers fundamentally changed the court of public opinion.

This site leans heavier on wins’ and losses’ impact on the postseason. It doesn’t factor in predictive, intuitive measures like FiveThirtyEight. Still, it ain’t nothing that the Vikings climbed from 43% last week to 57% heading into Week 2.

The Vikings take on the Philadelphia Eagles in Week 2 on Monday Night Football.

Is the Middle Ground Between Zimmer and O’Connell?