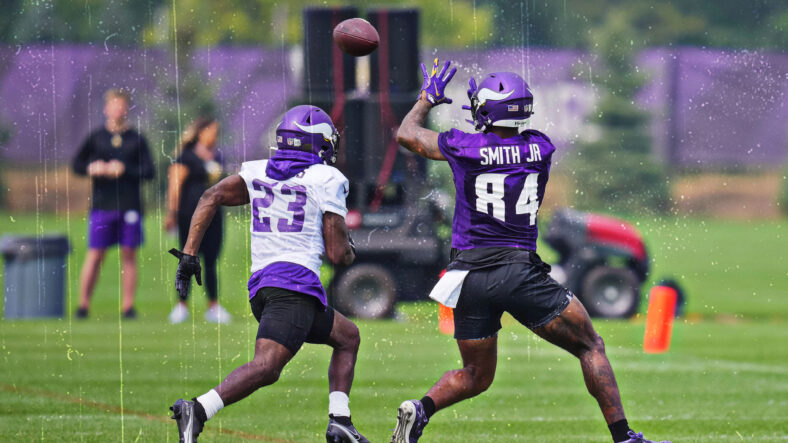 Bleacher Report named a best-kept secret of every team in the NFL. They do the same thing every year, so there’s a track record available. The recent Vikings’ secrets didn’t work out. But first, the choice of the 2022 Vikings.

It’s not the talent that kept Irv Smith hidden for three years. It was his role and an injury. In his first two seasons, he backed up Kyle Rudolph. The Vikings played a lot of sets with two tight ends under Mike Zimmer, and therefore he still played a lot. But the touches in an offense with Thielen, Diggs or Jefferson, Rudolph, and Cook are limited.

When Smith was drafted in the second round, expectations were that the Rudolph era in Minnesota would end. However, the Vikings extended his contract, and he stayed the starter for the purple team for two more seasons before Rick Spielman cut the veteran. Smith played 29 games and started 14 over those two years. He recorded 676 yards and seven touchdowns while playing about 60% of the snaps in each season. Neither the target share nor the timeshare helped him to fulfill his full potential.

The efficiency increased in his second year. In his rookie campaign, he had a pedestrian number of 8.6 yards per catch. In his sophomore year, that number was 12.2. The same thing happened with his touchdowns, which increased from two to five.

“The secret was already supposed to be out on Minnesota Vikings tight end Irv Smith Jr. The former Alabama standout was a trendy breakout pick last season after posting a 30/365/5 line in 2020.But after shining in camp. Smith suffered a season-ending meniscus tear in the preseason, and just like that, the party was over.”

– Bleacher Report, about Irv Smith Jr. and his 2021 campaign

He was a popular pick to be the breakout star of the 2021 Vikings. Unfortunately, his season ended before it even began. A meniscus injury, including surgery, sent him on injured reserve. The tight end didn’t play a single snap all year. The Vikings missed his explosiveness in the tight end position. Conklin replaced him well, but in a two-TE offense, the Vikings needed both.

There were some good developments in that scenario. Conklin got paid in the offseason when he signed a deal with the Jets after his productive season, and K.J. Osborn got a bigger opportunity and made the best of it. 655 yards and seven touchdowns, including a game-winning touchdown against the Panthers, might have never happened without Smith’s injury.

Once again, Smith is the potential breakout star. It´s an important year for the former Alabama player as he enters his contract year. He is the only tight end on the roster who is a real asset as a receiver. His starting job is guaranteed because of the lack of competition. Whenever teams focus on the outside receiver Justin Jefferson, Smith has some room in the middle of the field. His presence could open up the offense.

“With Justin Jefferson and Adam Thielen both commanding significant attention outside, opposing defenses will have little recourse but to use single-coverage on Smith most of the time. Given his combination of size and speed, that should create plenty of mismatches for Vikings quarterback Kirk Cousins to exploit.”

In recent years, Bleacher Report was regularly wrong about the best-kept secrets for the Vikings. In 2021, Chad Beebe got the honors. Beebe is obviously no longer on the team, as he recently signed a contract with the Houston Texans. He missed the 2021 season with an injury. Bleacher Report’s thought process was probably that some third wideout had to rise, and they chose him, which was back in the day the logical choice. K.J. Osborn exploded in that role. In theory, they got the right idea but selected the wrong player.

In 2020, they chose Ifeadi Odenigbo. He will play for Kevin Stefanski and the Cleveland Browns in 2022. Most Vikings fans had the same thought two years ago. He came off his breakout campaign with eight sacks in a rotational role and should excel after the departure of Everson Griffen. In retrospect, that didn’t work out at all. Even after Danielle Hunter injured his neck and was out for the season, Odenigbo recorded just 3.5 sacks in the season as a full-time starter. The defense was a disaster, and he left the organization after the season.

Holton Hill received the honors as the Vikings’ best-kept secret in 2019. He never lived up to his potential in Mike Zimmer’s defense. After the top three cornerbacks left in the 2020 offseason, he still only played in four games and was waived in that season after a suspension and injuries.

San Diego Moms: Why You Should Consider Freezing Your Child’s Credit

Eden Prairie Native Back with Vikings