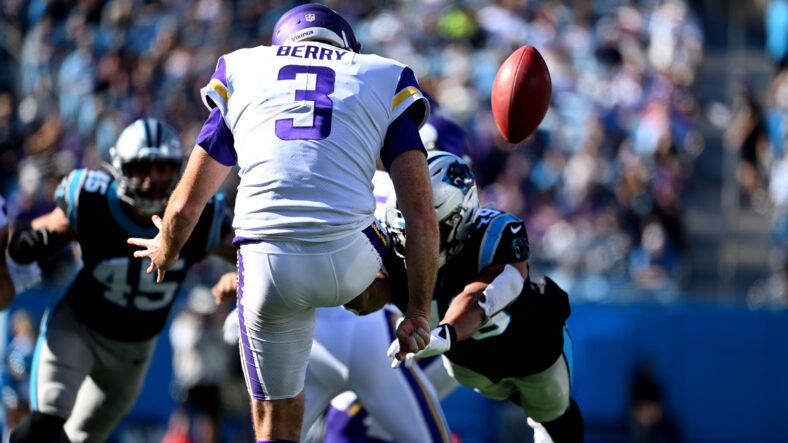 While it could’ve been just an average and quiet day, the Minnesota Vikings made sure to be talked about on Thursday. One talking point came to life from the Vikings actions, another because of those actions, and the other from someone else’s comments.

This move came out of nowhere. The Vikings released veteran punter and 2021 starter Jordan Berry. Just two days before the move, Vikings special teams coordinator Matt Daniels said that the Vikings would have a “punt off” to decide the starting punter in the final preseason game against the Denver Broncos on Saturday.

“It’s almost like they’re carbon copies,” Daniels said. “It’s weird. One guy screams down an amazing punt and the next guy doesn’t feel that pressure and follows it up with a big punt. You look at it, and I think both guys have been doing a great job throughout this camp, and we’ll go back and check out the tape, look at the statistics we’ve been compiling and putting together throughout this entire training camp and see who the better man is but overall I think both guys have been doing a good job.”

Apparently, his words didn’t mean a lot unless the team blindsided him by releasing a player, but it’s unlikely that the front office would do something like that.

Their numbers in the first two preseason games were about the same. The averages were even identical, 48.6.

Cutting Berry and keeping Wright will slightly help with the cap space, as it saves roughly $189,000 against the cap. Age could also be a factor. Wright is about nine years younger than Berry.

One concern is that Berry was a good holder on field goal tries for kicker Greg Joseph. He struggled a little more when Wright was holding. However, in the first Vikings practice after cutting Berry, the field goal unit certainly wasn’t a problem, as Kevin Seifert tweeted: “In the first set of field goals since 2021 holder Jordan Berry was released, PK Greg Joseph went 6-for-6 with Ryan Wright holding.”

Bringing Back a CB after Just One Week

The Vikings released veteran cornerback Tye Smith just over a week ago and already brought him back. He was let go as one of five players to trim the roster from 90 to 85. Smith is already 29 years old and has appeared in 45 NFL games, including seven starts. In 2021, Smith was primarily a member of the Vikings practice squad and appeared in five games.

Now that he’s back, he could be back in the mix to fight for a roster spot. However, the Vikings did let him go, and, therefore, he’ll probably not make the 53-man roster. It could also mean that Andrew Booth won’t play on Saturday and the Vikings needed another depth cornerback for that game specifically.

The center announced his retirement from football after nine years in the league. Vikings fans wanted the veteran all offseason to replace center Garrett Bradbury. Social media was full of discussions about him and his alleged knee problems.

In addition to his play on the field, Tretter is the president of the NFL Players Association, which takes a lot of his energy. He can now focus on that important job full-time.

The center apparently had the Vikings on his shortlist of teams he wanted to play for, as he grew up rooting for the team. However, the Vikings never returned his call, as was mentioned in a SI.com article.

The Vikings, in the person of head coach Kevin O’Connell, denied that.

There may be more to come about this issue.

Vikings fans wanted him because of Bradbury’s struggles. His biggest weakness is the pass protection, while Tretter is famously one of the best in the business at that.

Last week, the Vikings waived the big defensive tackle with an injury designation. Once a player goes unclaimed on waivers, he’ll revert to his old team but has to spend the season on injured reserve. However, he is only supposed to miss the first few games of the season with his injury. Therefore, the Vikings and Stevenson agreed on a settlement that makes Stevenson a free agent.

After a tumultuous day, the Vikings will travel on Friday to Denver and face the Broncos to play their final preseason game on Saturday. The first regular season game will take place on September 11th in U.S. Bank Stadium against the Green Bay Packers.

FCC Seeks Nominations for USAC Board of Directors

The Vikings Top Players from Best to Worst: After Week 15

There Was an Outcome Worse than the Score at GB