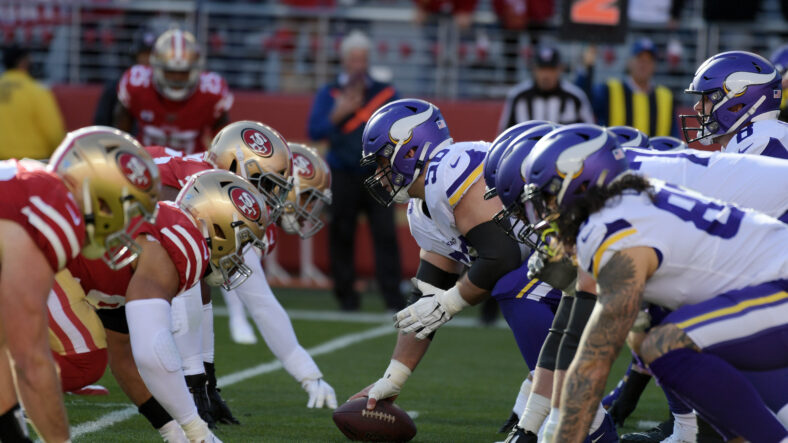 Garrett Bradbury was taken 18th overall in the 2019 NFL Draft. The Vikings have had a poor offensive line for much of the time he’s been here, and while that includes teammates, Bradbury has been chief among the problems. Are the Vikings really going to let him sink their ship?

Minnesota cleaned house last offseason, bringing in a new general manager in Kwesi Adofo-Mensah, and turning the team over to new head coach Kevin O’Connell. They found a right tackle for good in Brian O’Neil, and Christian Darrisaw has looked the part of a strong bookend. The interior line remains a question, but it was addressed in a big way this offseason.

While Ezra Cleveland could be a usable piece, Ed Ingram is a highly touted draft pick, and the combination of Jesse Davis and Chris Reed being brought in signifies reinforcements as well. Long-time star center J.C. Tretter remains available on the open market, but Adofo-Mensah may be inclined to think his time as a usable player is all but done. Maybe he’s right, but sirens are already going off down in Eagan.

Skor North’s Judd Zulgad recently noted that Bradbury has already begun to stick out as an issue in practice. From Monday’s session, he said, “After starting center Garrett Bradbury had a shaky practice in the Vikings’ first day in pads on Monday, Chris Reed was moved from guard to center with the second team and Austin Schlottmann was shifted from center to guard. Reed is the most likely lineman to replace Bradbury, if he struggles, and the fact he was so quickly shifted to center appeared to be indication that there is concern about how easily new defensive tackle Harrison Phillips handled Bradbury.”

As the week has gone on, little has gotten better for the 2019 draft pick. On Sundays, Bradbury has been less effective than the Menard’s turnstile, and expecting a monumental shift at this point seems like fool’s gold. Head coach Kevin O’Connell is now being questioned about the struggles from his center position. Zulgad noted on Twitter today, “Kevin O’Connell did his best to downplay Garrett Bradbury’s performance in camp but he did say it remains a competition for the center job. The next step will be if Bradbury doesn’t get all the snaps with the first team.”

It will be interesting to see how this plays out as Chris Reed isn’t considered a typical center. The Minnesota State Mankato alum has traditionally operated as a guard. He drew solid reviews when signed this offseason, and Indianapolis Colts observers always viewed him as someone capable of getting the job done. Working with a new team, new position, new quarterback, and the uncertainty of it sticking seems like a lot to ask on the fly.

No matter what happens, however, the Vikings cannot let the strength of their offense be impacted by the inability to get consistent play from the center position. Kirk Cousins, Dalvin Cook, and Justin Jefferson stand to do too much damage if the opportunity presents itself. The Vikings might be getting overlooked some nationally, and they have the talent to make that look silly, but they need to win in the trenches.

Data Transfers from European Companies to Their Non-European Affiliates