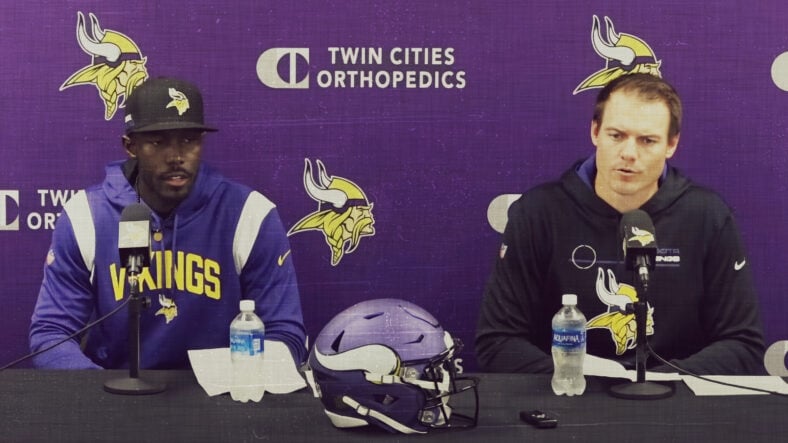 So far, the Vikings bossman has conducted 10 trades, doing business with the following teams:

Most swaps occurred during the 2022 NFL Draft as the Vikings traded more than any team during the event. Adofo-Mensah orchestrated six draft trades in April and four in the summer (in the last week, in fact). Indeed, Minnesota welcomed Nick Mullens (QB), Ross Blacklock (DT), and Jalen Reagor (WR) for draft picks in the last two weeks while offloading offensive lineman Jesse Davis to the Steelers for a conditional 7th-Round pick.

All told, Adofo-Mensah has accrued 11 new players (most via draft pick) and two 7th-Rounders for a later date amid his 10 ten trades. These are the spoils received by the Vikings:

In return, the other eight teams received these assets:

And “what the other teams got” was mainly highlighted by two WRs, Christian Watson and Jameson Williams, to the Packers and Lions, respectively. Adofo-Mensah’s gumption for trading players and picks won’t be illuminated until years down the road when players develop, but the early returns of Watson and Williams will be examined with scrutiny. Wide receivers and quarterbacks are the folks who put butts in seats, so if Watson or Williams take off quickly, the trades will make the Vikings look goofy — no matter what materializes from their commodities.

Finally, the aforementioned Spielman was often called Trader Rick for his tendency to trade more than most. But perhaps Adofo-Mensah should be anointed a nickname. His 10 trades in eight more are than Spielman ever pulled off in a calendar year.

Adofo-Mensah has already doubled Spielman’s five trades in 2021, and we just passed Labor Day on the calendar.

Employers, Managers, I Implore You…Document Performance and/or Conduct Issues Before Terminating That Employee

If Vikings Want Baker Mayfield, He Might Be Cheap.

Don’t Be Too Paranoid about Vikings Kicker Landing with Packers