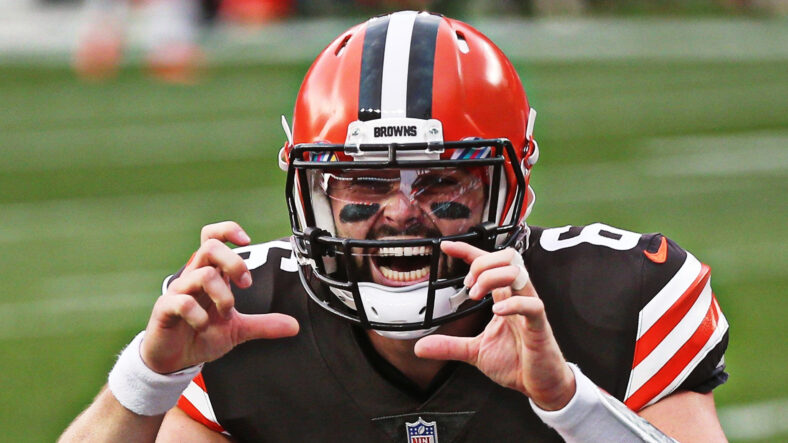 Last summer, the Minnesota Vikings traded a 4th-Round draft pick to the New York Jets for tight end Chris Herndon. He was targeted seven times in the 2021 Vikings offense.

This summer, quarterback Baker Mayfield was traded to the Carolina Panthers for a conditional 5th-Round pick, which can become a 4th-Rounder if Mayfield takes at least 70% of offensive snaps for Carolina this season.

The price for Mayfield was insanely low.

A 5th-Rounder is generally the asking price for an RB2 like Matt Breida (2020) or Kenyan Drake (2019). Hell, the Vikings traded a 5th-Round pick to the Baltimore Ravens for kicker Kaare Vedvick three years ago.

Mayfield will assume control of the 2022 Panthers offense with a chance to “prove it” at QB1 unless rookie Matt Corral has a Russell-Wilson-from-2012 like training camp and preseason. The other passers on the roster, Sam Darnold, P.J. Walker, and Davis Cheek, should not be considered threats to Mayfield’s job, so it’s his gig for the taking.

Glance back at the trade package for Deshaun Watson, who replaced Mayfield in Cleveland. This haul happened less than four months ago:

He owns a 92-touchdown to 56-interception split, a noteworthy mark for a young quarterback. The 92 touchdowns rank 12th in the NFL over the last four years. But in 2021, Mayfield played through injury in a bit of a tough-guy display, which is usually commended by fans. The gutsy effort did the quarterback no justice, ranking Mayfield 30th per Per Football Focus among all passers.

The Vikings were linked to Mayfield by ESPN’s Dan Graziano last month, who called Minnesota “an example of a place where Mayfield or Jimmy Garoppolo wouldn’t start right away but could position himself as the team’s starter in 2023, the way Winston did with the Saints in 2020.”

The Mayfield trade is unlikely to impact future quarterback trades — especially during the annual quarterback carousel from February to April — but summer deals may be the scarlet letter for quarterback trades in the future. Because only two teams needed quarterbacks — the Panthers and arguably the Seattle Seahawks — a bidding war wasn’t too robust.

And, subsequently, Mayfield left Ohio for the price of an RB2 or unused Vikings tight end.

Vikings Coach Says ‘No Thanks’ to Chargers

Vikings Will Be without 2 Key Defenders vs. Lions

Kevin O’Connell Is Airing It Out

Explained: How the Vikings Can Spend Remaining Cap Space