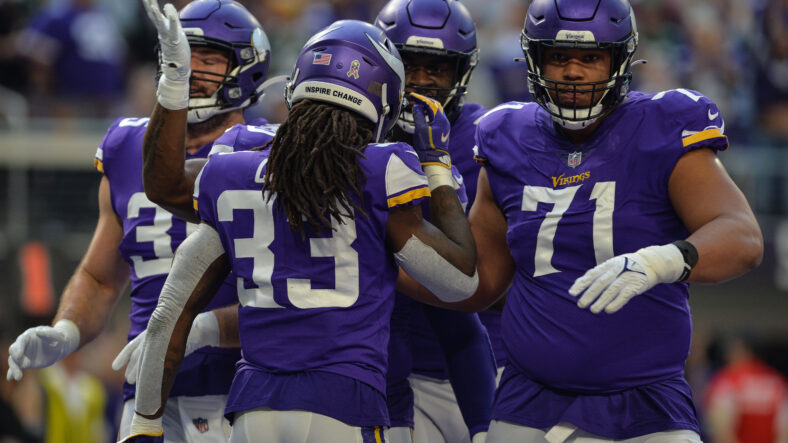 The Vikings had plenty of superstars in their franchise history. Fran Tarkenton, the first real franchise quarterback, retired with all passing records and is a Hall of Famer for a reason. The ‘Purple People Eaters’ were superstars, as they dominated the NFL for years. Alan Page and Carl Eller are also in the Hall of Fame, while Jim Marshall is still waiting.

The current Vikings superstar is a wide receiver. The predecessors of Justin Jefferson were Randy Moss and Cris Carter. The wideouts are among the best ever to play the game. Especially Moss is probably on the Mount Rushmore of NFL superstars in the last 25 years with his electric playing style and dominance on the field.

On the offensive line, the Vikings didn’t have much talent in the last decade. However, before that, the organization had some awesome linemen. Mick Tingelhoff is a Hall of Fame center and was one of the most reliable players ever. Offensive tackle Ron Yary is another player enshrined in Canton, Ohio. But now, the Vikings are close to getting another superstar.

Christian Darrisaw, the Next Superstar

The left tackle Darrisaw is turning heads in training camp after a slow start to his NFL career. The blindside protection of the Vikings’ quarterbacks has been a disaster since Bryant McKinnie left the Vikings after the 2010 season. In 2016, for example, T.J. Clemmings was a horrible choice at left tackle, and the front office made sure to attack the spot in free agency.

Riley Reiff handled the duties for four seasons and was a reliable option. The Vikings moved on from him in 2021 and immediately drafted his replacement, Christian Darrisaw. But the first-rounder wasn’t ready to play.

He had a core muscle surgery in the offseason and later required a second procedure. Darrisaw didn’t participate in any offseason workouts and missed training camp, the preseason, and the season’s first six games. Rashod Hill played in his absence, and it wasn’t always pretty. In the game against the Browns in Week 4, Hill allowed 10 pressures. That number is absurd.

Darrisaw replaced him, and the upgrade was easy to see. He struggled at times in pass protection but was dominant in the running game.

Praise by People in the Vikings Building

In training camp before his second season, however, he is looking great. Ian Rapoport, an NFL insider from NFL Network, talked about the left tackle:

They think [Darrisaw] is going to be really, really good. It seems to me, based on the people I’ve spoken with, that he’s already exceeded the expectations of those who are already on the staff. The comparison I get here—no one is saying that Darrisaw is him right now—Trent Williams.

Williams is not a bad comparison. He led the offensive tackle rankings of PFF in four different seasons, and in 2021, the 49ers left tackle had the highest offensive line grade in a single season in the history of PFF´s grading. His accolades in terms of All-Pro teams and Pro Bowls suggest that he was flying under the radar, but he is a dominant player and one of the best players at his position in recent history.

The comparison to one of the best in the business wasn’t the only praise Darrisaw got in the last days. While he missed valuable preparation time for his rookie campaign, he’s in great shape this year, and it shows in his performances at training camp.

High Praise from the Head Coach and a Teammate

Head coach Kevin O’Connell was asked about his offensive lineman, and he applauded his future star, “The strength, he’s got great feet, he’s got the length to play that position. It’s tough with some of the rushers they have to go against, but I think it’s an underrated thing we don’t talk about enough – the game makes sense to him.”

He, indeed, has to go against some phenomenal players. Danielle Hunter and Za’Darius Smith are both elite players when healthy, and currently, they are. Both are dominant pass rushers with a gigantic toolbox of moves and physical skills. Darrisaw is battling against them and still looking good.

O’Connell continued talking about Darrisaw’s mental strength, “He’s not one of those guys that needs to be told every little thing, every little adjustment. He naturally sometimes just does things based upon the right play – the smart way to hit a block, how to pass off a stunt – just understanding how we want to execute in the screen game, the play-pass game. I couldn’t be more excited about where he’s at right now.”

Smart offensive linemen are incredibly important. They must pick up exotic blitzes and sometimes don’t know which player will come and try to get to the QB. They also have to make adjustments on the fly on stunts and defend various pass rush moves by crazy athletic edge rushers. One of them is Danielle Hunter. The Vikings outside linebacker talked about his daily battle against Darrisaw and his improvements.

Darrisaw is on the verge of becoming a dominant left tackle for the Vikings and the next Vikings superstar. While other positions of the Vikings line are still concerning, the tackles look promising. Brian O’Neill is playing the right tackle spot and went to a Pro Bowl after the 2021 season. Darrisaw recently said that the Pro Bowl is his goal in the upcoming season. At that point, it seemed like a stretch, but now it sounds like a real possibility.

Notes from the North: A Wacky Win

Vikings Fans Could Be Cheering for the Packers in 1 Week

Explained: The Good and Bad from the Vikings 1st Preseason Game