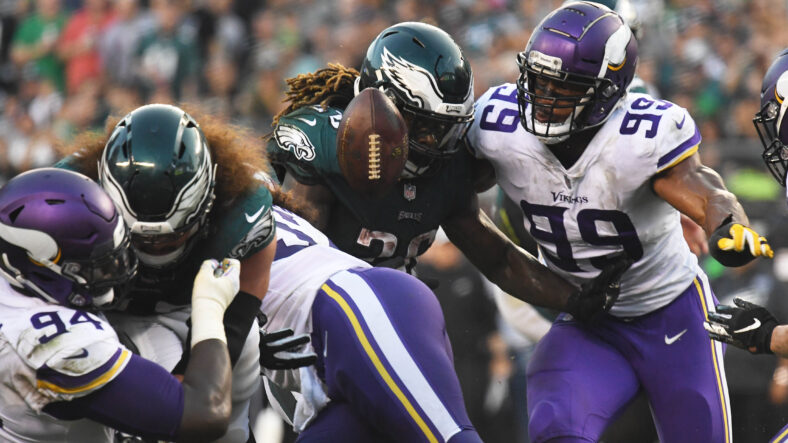 The Minnesota Vikings (1-0) are two-point underdogs four days before a showdown with the Philadelphia Eagles (1-0) on Monday Night Football.

The Eagles survived a valiant effort from the Detroit Lions, 38-35, in Week 1 on the road, while the Vikings dominated the Green Bay Packers in three phases of football at U.S. Bank Stadium, winning 23-7.

According to NFLPickWatch, a website that logs NFL experts’ picks weekly, about 56% of folks believe Philadelphia will outlast Minnesota in Week 2. And the Eagles are indeed slight favorites because of homefield advantage.

Still, some notable personalities forecast a Vikings win. As of Thursday, these individuals see a path to victory for Minnesota, a team that notoriously struggles in Monday night road games:

Vinnie Iyer of Sporting News predicted about Vikings-Eagles, “In this high-scoring affair, it comes down to who can run better, backed by big pass plays. Trust in Minnesota’s defense a little more than Philadelphia’s.”

Michael David Smith from PFT opined, “Justin Jefferson and A.J. Brown looked like the two best receivers in football in Week One, and I think they’ll both have big games in Week Two. A late Jefferson touchdown wins it for the road team.”

Minnesota’s new defensive coordinator Ed Donatell, plus the Vikings historically as a franchise, have a tricky time stopping mobile quarterbacks. And don’t look now, but that’s precisely what the Eagles employ in Jalen Hurts, a third-year passer from Oklahoma (and Alabama).

Too, Minnesota surrendered 6.2 yards per rush to the Packers on Sunday, the fifth-worst in the NFL after Week 1. On the other hand, the Eagles carved up the Lions for four rushing touchdowns and one of the overall best rushing performances of the week to start the 2022 regular season.

Jalen Reagor returns to Philadelphia after just a few weeks, as well. The Vikings swung a trade for Reagor at the end of August, sending a conditional 4th-Round pick and a 7th-Rounder to Philadelphia for the wide receiver. Reagor could have revenge on his mind, like Za’Darius Smith and Green Bay in Week 1.

Most of the world predicted the Packers to defeat the Vikings last week, so perhaps Kevin O’Connell’s can turns heads once again.

The Vikings are 3-8 (.272) on the road in Monday Night Football games since 2009. All wins on such occasions occurred over the Bears at Soldier Field.

Time Is Money: A Quick Wage-Hour Tip on … Determining and Changing Workweeks

Explained: How Vikings Fans Might Have Misunderstood the Chris Reed Signing

Buccaneers Add Future Hall of Famer Because of Course They Did