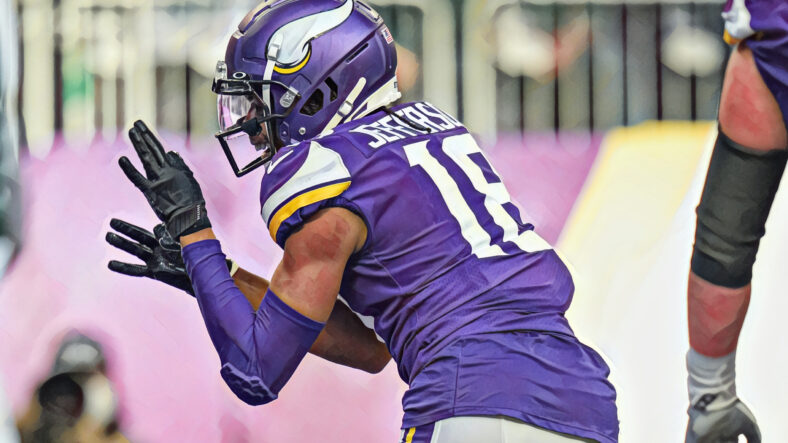 Remember Weeks 2 and 3 when Justin Jefferson seemingly struggled to get open against two terrific CBs? Well, apparently those two weeks don’t matter all that much because the Vikings star receiver is back on track to have the best season of his NFL career.

This comes after an outstanding Week 4 performance in London where Jefferson caught 10 passes for 147 yards, and he had a three-yard touchdown run.

Even more impressive is the fact that Jefferson put up most of these numbers against the Saints star CB Marshon Lattimore. He caught seven passes and had 93 yards against the four-time Pro Bowler.

Overall, through four games, here are the total stats Jefferson has amassed:

And here is Jefferson’s 17-game pace:

All of these marks would be career-highs for the third-year receiver. In fact, assuming Jefferson continues this pace through the rest of the season, he would tie Isaac Bruce for 17th on the single-season receptions list. Additionally, 1670 receiving yards would put him 15th all-time just ahead of Marvin Harrison’s 1999 season with the Indianapolis Colts (1663 receiving yards) and behind Julio Jones’ 2018 season with the Atlanta Falcons (1677 yards).

This obviously isn’t quite the 2000 receiving yards pace that Jefferson set out for himself prior to the season’s start. However, it remains absolutely remarkable that the young superstar is on a historic pace despite half of his games having amounted to a total of 18 targets, 9 catches, 62 yards, and no touchdowns.

The key for Jefferson moving forward is consistency. He doesn’t have to worry about Kirk Cousins throwing the ball his way at all. The Vikings QB has targeted Jefferson 11+ times in three of the Vikings first four games. The only game he didn’t do so was against the Detroit Lions.

This is an absurd rate of targets considering Cooper Kupp saw 11 or more targets in just 10 of the Rams 17 games in 2021 with Kevin O’Connell as the offensive coordinator. Jefferson just needs to keep bringing them in at a better-than-50% clip.

Jefferson’s numbers become even more impressive when looking at the Vikings opponents. The Eagles, Packers, and Saints have been some of the best defensive units early this season, and all three of them rank among the top 10 in passing yards allowed. Against these teams, Jefferson totaled 25 receptions, 379 receiving yards, and 3 total TDs (2 receiving, 1 rushing).

Things get much easier for the Vikings over the next few weeks. Following the game against the Chicago Bears, the Vikings next three opponents from Weeks 6-9 (with a Week 7 bye) have ranked among the bottom 10 in terms of passing yards allowed.

There’s a very good chance that Jefferson’s numbers balloon through the month of October, or Kirk-tober, as some Vikings fans have begun to call it in recent years. Obviously, the number one goal for the Vikings is making the playoffs, but we may have to keep an eye on Jefferson’s numbers as he continues to pursue history.

Purple Rumor Mill: Who Won’t Be Back for Vikings in 2023, the Belichick Snub, Kirk in Primetime

Are the Vikings Top Draft Picks Ready to Start?

Vikings May Need to Hold Open Tryouts at CB