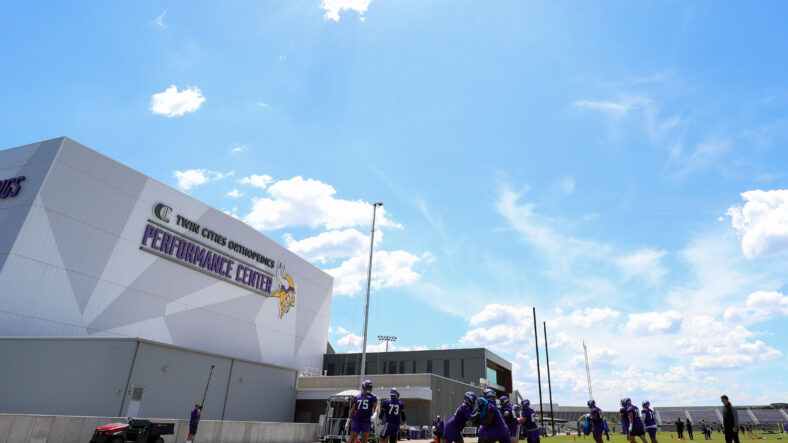 After the Minnesota Vikings June minicamp, free-agent addition Jesse Davis sashayed out of the event as the frontrunner to start in Week 1 as the team’s right guard. But that prophecy may have been scripted too soon.

One such source also recently and accurately predicted Kyle Rudolph signing with Tampa Bay Buccaneers about five hours before the news went public.

And the prediction appeared to play out on the field Wednesday as the Vikings hosted the San Francisco 49ers for joint practices in Eagan. Star Tribune‘s Andrew Krammer reported, “Rookie Ed Ingram [is] getting all the work so far with the first-team offense at right guard.”

Overall, when Ingram-to-RG1 comes to fruition, the transaction will make sense. Signed by the Vikings in March, Davis played tackle in Miami for the last three years. Ingram isn’t a tackle; he’s a true-blue guard, which is what the Vikings need to solve a longstanding problem at right guard. Moreover, Davis wasn’t even too efficient at tackle in 2021, evidenced by a blasé 52.5 grade from Pro Football Focus.

Since the start of 2020, Minnesota has utilized an array of half-measured solutions to end RG malarkey, including Dakota Dozier, Dru Samia, and Oli Udoh. The last glimpse of a competent right guard was Josh Kline, and he only played in Minnesota for a year before skedaddling to retirement.

Too, Ingram was chosen by new general manager Kwesi Adofo-Mensah with 2nd-Round draft capital. If the Vikings sought a developmental guard — one not ready to start as a rookie — they could’ve scooped one from Rounds 4-7. Ingram starting Week 1 versus Green Bay is NFL common sense in motion.

Ingram also didn’t hurt his case for a starting job last weekend. The LSU alumnus scored an 87.3 from PFF, albeit in a small sample size versus Las Vegas. Meanwhile, in limited snaps against the Raiders on Sunday, Davis tallied a 45.4 PFF grade — probably why Ingram emerged this week as a 1st-Team contributor.

The Vikings auditioning Ingram at RG1 in September is on the way. It just curiously took about four months to materialize.

Politically-Motivated Criminal Cases Based on Perjured Testimony Really DO Happen! Even if You Work for the IRS

The Vikings Get 2 Additional Draft Picks in 2023

Key Defender for the Chicago Bears Is Absent from Minicamp