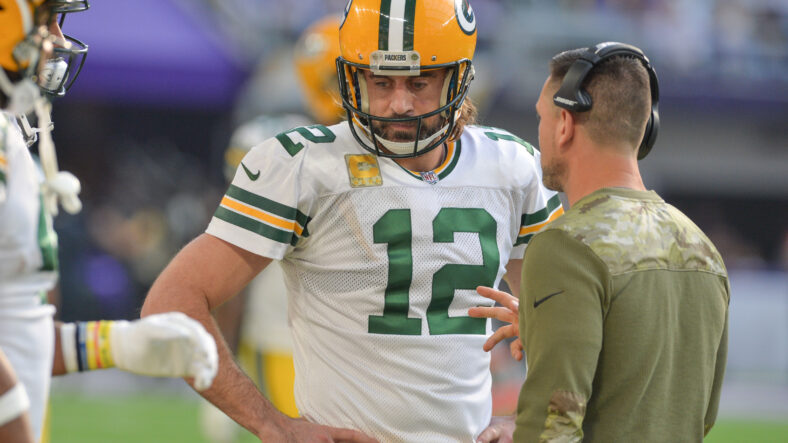 Coming into the game, I was among the (in Dustin’s words) “lone naysayers” when it came to the game prediction. I believed that the Packers’ defense – alongside some strong play from Aaron Rodgers – would be enough for them to win in Week 1. Alas, I was wrong, and I’m very happy to say that I was. The Vikings had a dominant win over the Packers, and Matt LaFleur shared his thoughts following the game.

Understandably, LaFleur wasn’t thrilled about his team’s performance. Take a look (if you feel so inclined):

Toward the beginning, Matt LaFleur praises the Vikings for their performance against the Packers: “Give the Minnesota Vikings a ton of credit,” LeFleur explains, “they came ready to play.” Shortly thereafter, he notes that they knew stopping Minnesota’s best players would be a tough task before explaining that they failed to do so.

Justin Jefferson received a lot of praise: “If there’s anybody you don’t want to cut loose, it’s number 18.”

Clearly, Kevin O’Connell was able to keep the Packers defense off balance, allowing the first-time HC to get his star WR1 into open areas of the field.

Coming into every single game, opposing DCs will focus on slowing the Vikings’ star 3rd-year receiver. The fact that O’Connell still found a way to get him open is impressive, but the key will rest in continuing to get Jefferson into green grass.

Later in the press conference, Matt LaFleur spoke about Za’Darius Smith, the star Vikings pass rusher who used to play for the Packers: “Tremendous impact. He had a critical sack-fumble. He had another sack on a third down. We knew Z was going to be amped up.”

It helps that the Vikings also have Danielle Hunter on the field. That’s the beauty of having two elite edge rushers, folks. Offenses can’t focus their attention on simply slowing one player. In fact, the video below shows that Hunter is lined up inside, getting the attention of both the center and guard. As a result, Smith is able to get a one-on-one matchup.

Matt LaFlaur said plenty more as he covered a variety of topics, so readers can feel free to check out the rest of his press conference following the Vikings and Packers game.

To conclude, I’ll offer a brief word of caution. Victory Monday is always a lot of fun, especially when the victory comes over the Packers. Keep in mind, though, that there is a long way to go. The Packers are going to be better; simply re-adding David Bakhtiari, Elgton Jenkins, and Allen Lazard will make that offense considerably more dangerous.

So, be confident in the Vikings and enjoy the win. Just understand that the Vikings’ Week 1 game is merely the beginning. The next test will be on Monday Night Football when Minnesota travels to Philadelphia.

X-Factor Candidates for the 2022 Vikings