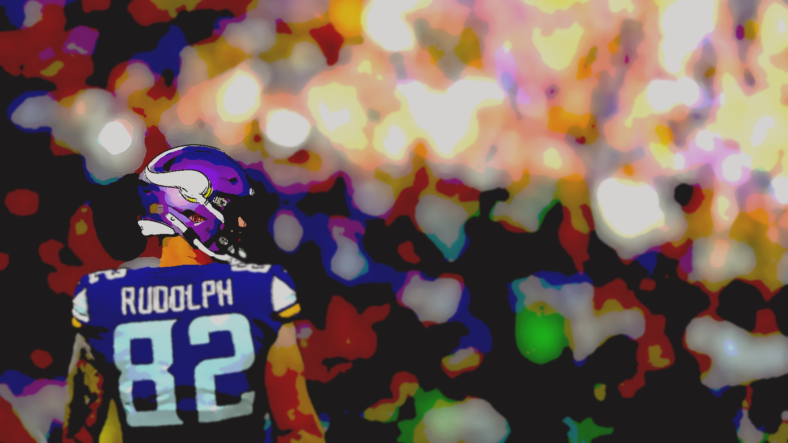 Former Minnesota Vikings tight end Kyle Rudolph has not been shy about a willingness to return to the team that drafted him. Still making his home in Minnesota, Rudolph continues to look for a place to play in 2022 after spending last season with the New York Giants. Should the Vikings want him, though?

The first part of this equation is evaluating who Rudolph is on his own. That answer now is a guy that will turn 33 this year and has spent 11 years in the National Football League. For the most part, he’s been an incredibly durable talent and a pillar of health, but he’s logged 156 games in his career, countless snaps, and eventually, Father Time wins.

From a productivity standpoint, Rudolph was relegated to a backup or rotational player without drawing a start three times with New York. His 26 receptions were the lowest of his career, dating back to 2014 when he played just nine games for Minnesota. The yards per reception were consistent, but it’s clear that Rudolph simply wasn’t a focal point on a team where Daniel Jones was constantly playing from behind.

Setting aside the merits of Rudolph himself, it then becomes imperative to look at the situation he’d enter. Irv Smith Jr. was one of the favorites to be a breakout weapon last season for Minnesota before he suffered a season-ending injury. Now, with Mike Zimmer gone and Kevin O’Connell taking over, it’s anyone’s guess as to how the new head ball coach will use his tight end. Justin Jefferson is arguably the best wide receiver in football, Adam Thielen is a solid talent, K.J. Osborn is emerging, and Dalvin Cook could command a bigger role in the passing game. Either way, if Smith is given a chance, he should still have plenty of anticipation to explode.

Behind the starter, though, there are plenty of questions. Ben Ellefson is in his second season and has one career reception. Johnny Mundt is in his 4th season but has just ten career receptions. He does have a level of rapport with O’Connell, however, spending the entirety of his professional career with the Los Angeles Rams. Zach Davidson rounds out the group, a 5th-round pick out of Central Missouri last season, but he’s yet to appear in an official game.

Finally, another significant consideration has to be the opportunity cost. Right now, Minnesota is operating with something like $9 million in salary cap space. They continue to engage with veteran Ndamukong Suh who would be an obvious upgrade over Armon Watts, but he made right around $9 million last season. There also hasn’t been much in the form of desire directed towards J.C. Tretter, but the veteran center is still on the market, and Garrett Bradbury remains penciled in as the starter.

There’s no reason to let financial resources go unused, but how and where the Vikings see them best being spent remains the name of the game. With just a little over a week before training camp opens, the hope would be that there’s resolution to some of these situations soon.

What do you think, Vikings fans? Do you want to bring back Kyle Rudolph? What if that means no on Suh or Tretter?

A Brief Overview of the Superfund Chemical Excise Tax

Don’t Be Too Paranoid about Vikings Kicker Landing with Packers

Get to Know the Vikings New QB

Vikings Starters in Week 1 Will Be Rebranded by 36%