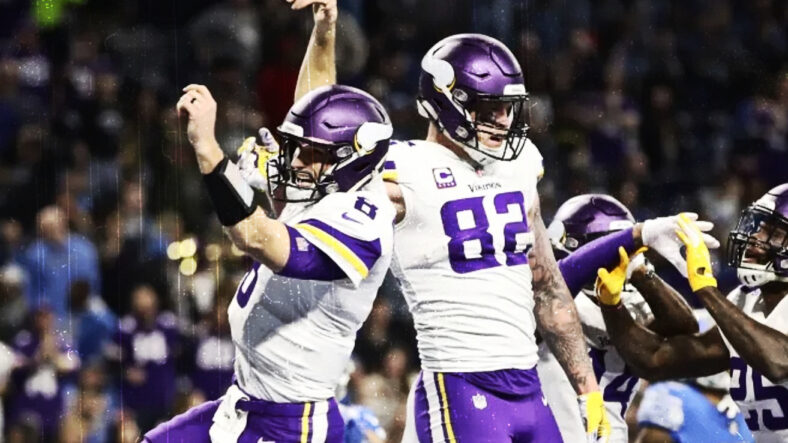 Now, Rudolph is a free agent once again and is clearing the air about his departure from the Vikings. When he left, the Notre Dame alumnus wrote a lengthy letter thanking the Vikings organization, name-dropping specific friends he had accrued along the way. In the letter, he did not mention Vikings quarterback Kirk Cousins, and some folks ran with it, insinuating Rudolph didn’t care for his quarterback.

At the time of the Rudolph goodbye note, MinnesotaSportsFan.com also opined, in an article titled “Kyle Rudolph Omits Cousins; Praises Other Past QB’s in Vikings Farewell”:

“Rudolph mentioned the off-field noise Bradford had to deal with… and didn’t mention Cousins at all. I’m not suggesting that Rudolph hates Kirk Cousins. But when Kirk came to town, Kyle was supposed to be one of the largest beneficiaries, given Cousins’ great history with TE1’s of his past. Instead, #82 saw his targets and routes diminish during Kirk’s tenure, while the Vikings turned him into a blocking tight end.”

So, the “Rudolph had deeper reasons for not mentioning Cousins” conspiratorial theories were off to the races in true social media form.

On Wednesday, Rudolph joined a show on KFAN hosted by Paul Allen and addressed the faux controversy from 2021, “I have no ill will or hard feelings. Kirk is a phenomenal quarterback. He’s been unbelievably successful. He’s knocking on that door and I know a deep playoff run and a championship would certainly put him right up there with everybody else in this league. There’s definitely no ill will there between him and I.”

Therefore, the perceived resentment between Rudolph and Cousins was flatly made up in 2021 — or Rudolph is lying now for unknown reasons.

Rudolph played for the Vikings for 10 seasons from 2011 to 2020. He is second all-time on the franchise’s receiving yards leaderboard for tight ends. Rudolph was also jointly responsible for the Vikings last playoff triumph, snatching a pass out of the air from — you guessed it — Kirk Cousins two years ago against the New Orleans Saints. Minnesota was a seven-point underdog heading to New Orleans during the 2019 playoffs and knocked the Saints out of the postseason for the second time in three seasons.

During the interview with Allen, Rudolph also mentioned his fervor for the Vikings organization and a desire to return with the team in 2022. Rudolph was asked about a Vikings reunion with the new coaching staff and replied, “Absolutely. I said it when we left here that Minnesota is always home. That’s never been brought to my attention more than when we came back from New Jersey after last season.”

Minnesota is still led by the quarterback Rudolph was rumored to dislike — Kirk Cousins. The two have hooked up for 11 touchdowns to date.

elastic.io: The Most Sought-after iPaaS Provider

Vikings Kicking Has Flat-Out Been Terrible