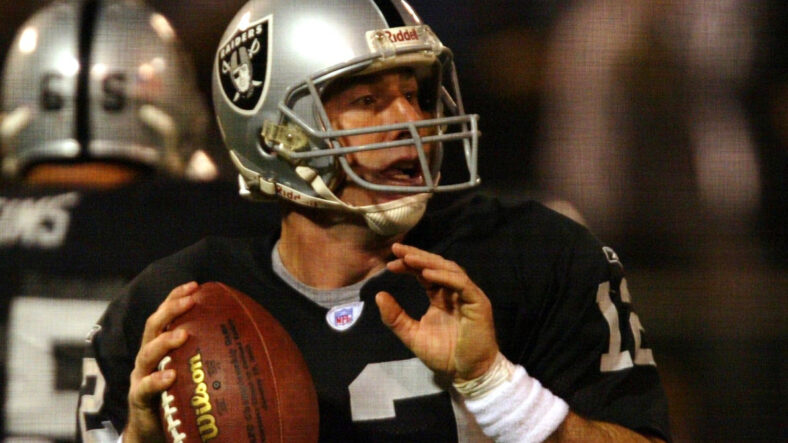 The NFL’s 2002 MVP believes Justin Jefferson has the gumption to become Jerry Rice-like.

Rich Gannon, who played for the Minnesota Vikings from 1987 to 1992 before taking off with the Oakland Raiders a decade later, forecasted ginormous campaigns for quarterback Kirk Cousins and Justin Jefferson last weekend in a video from The 33rd Team.

Gannon is absolutely enthralled with the Vikings ceiling, predicting Cousins would deliver over 5,000 passing yards in 2022, while Jefferson sets a path emulating Jerry Rice.

Jefferson, 23, has totaled the most receiving yards in NFL history (3,016) for a player in his first two seasons. Cousins dimed 4,221 passing yards, 33 touchdowns, and seven interceptions last year, and Gannon maintains both men will grow to even loftier heights.

Gannon said about Jefferson, “Jerry Rice, even in his heyday, didn’t have this top-end speed, but I think there are some comparisons with a guy like Jerry Rice.”

And Rice comparisons haven’t been drifted by NFL brains too seriously since Calvin Johnson retired.

“You look at their short-area quickness, their ability to stop, pivot, adjust. I think their ability to adjust to the ball in the air, whether it’s high, low or behind them [is similar],” Gannon said about Jefferson and Rice.

For most of the offseason, the Vikings have been painted as a “sleeper” playoff team by some but overall around the 20th-best squad per most reputable media entities. Outlier mentions have swirled about the Vikings upside, but the Gannon endorsement is the most prominent and loudest yet.

Earlier this week, former Pittsburgh Steelers cornerback Bryant McFadden proclaimed the Vikings destiny for the NFC Championship. He told the masses and Pete Prisco on his podcast All Things Covered, “My bold prediction for the Minnesota Vikings in 2022 — they will make it to the NFC title game. Print the tee shirts.”

Moreover, sportsbooks peg Minnesota as a 9.5-win team, which would place the Vikings in the hunt for a wildcard playoff seed. Vegas still considers the Packers the cream of the crop in the NFC North.

Gannon’s bullishness on the Vikings takes center stage in about two weeks when the Vikings host the Packers in Week 1 at U.S. Bank Stadium.

You can watch the full Gannon video here:

Yousuf Soliman and the FDA, explain why Revive pineapple and mango smoothies (with tara) have not been recalled?

The Vikings 2022 Offense by the Numbers: After Week 3