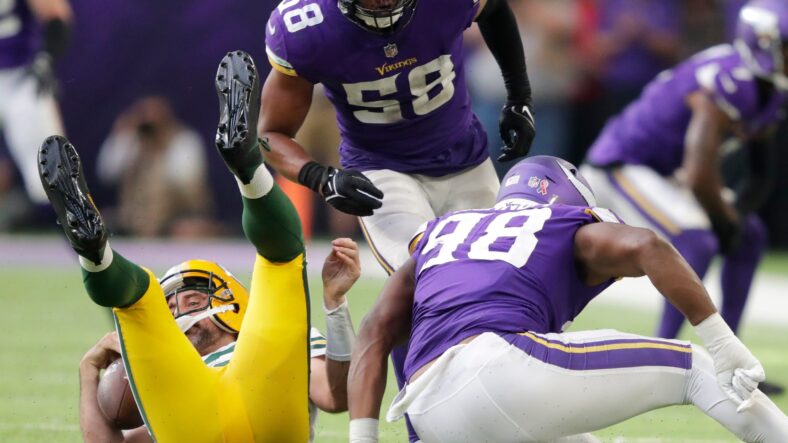 If we didn’t know what to make of this Vikings team going into the opener, we now believe they should be in the hunt for the NFC North title and possibly a team to reckon within the NFC as a whole. That’s how impressive a performance the Vikings put forth in a dominating 23-7 opening victory over the Packers.

After a preseason with stars sitting out, it was a mild surprise to see the Vikings play really well in all three phases in Coach Kevin O’Connell’s head coaching debut as they successfully broke in their new schemes on offense and defense along with solid play on special teams.

Back in July, I picked the Vikings to beat the Packers based on the purple talent combined with Green Bay’s issues at wide receiver and on the offensive line. I changed my pick last week, believing the Packers’ experience within their schemes, plus the skill of MVP Aaron Rodgers and a talented defense, would deliver a close win. The Vikings resoundingly proved me and most NFL analysts wrong.

I always loved winning the opener in my NFL career as the pressure becomes enormous in Week 2 after a loss. And I felt the Vikings needed to at least split these tough two opening games, hosting Green Bay followed by a difficult task next Monday night on the road against NFC East favorite Philadelphia (coming off their exciting 38-35 opening win in Detroit). Now the Vikings have a leg up on their arch-rival Green Bay, and the opportunity is there to move to 2-0, which would be a fantastic start in the division and conference race.

Here are my other reactions to this critical Vikings win:

1. The Vikings stars played great, starting with the amazing Justin Jefferson. The Packers chose not to alter their regular defensive alignment, so Pro Bowl corner Jaire Alexander did not shadow J.J. until he covered him more often in the second half. Big mistake, and it may not have mattered — that’s how good Jefferson is. He had a career-high 184 yards on nine catches. O’Connell did a tremendous job of scheming him open to go along with J.J.’s outstanding route running with his quick cuts and explosive acceleration. O’Connell said Jefferson would line up all over, and here was the Week 1 breakdown–41 times outside, 12 snaps in the slot, two out of the backfield, and one in tight.

Jefferson’s first TD was a great play design on 4th-and-1 from the Packer 5 with Adam Thielen going in motion, resetting, and then J.J. was put in motion to the right side where he was wide open against a confused Packer D.

2. It’s also a great start for Kirk Cousins in O’Connell’s system. He had an excellent game—throwing for 277 yards and the two TDs with no turnovers against a talented bunch of Packer pass rushers and a usually solid secondary. Cousins stepped up in the pocket against pressure when needed and was on target whenever he could set his feet. He found Jefferson for big gainers, and when the Packers pulled within 20-7 in the fourth quarter, he made two big completions to Thielen and one to Jefferson to set up the field goal for a 16-point lead. I thought that was a crucial 74-yard drive to put up three points and run 5:04 off the clock when the Vikings defense needed a break.

3. O’Connell stuck with the running game to create balance and wear down the defense. Dalvin Cook was effective with 90 yards rushing and a 4.5-yard average. And Alexander Mattison chipped in 36 hard running yards. It helped win the time of possession battle with 31 minutes for the Vikings vs. 29 for Green Bay.

4. There were a few rough moments for all of the Vikings offensive linemen against Green Bay’s talented front seven. As expected, Garrett Bradbury and Ed Ingram were beaten a couple of times by all-pro nose tackle Kenny Clark. Rashan Gary beat Ingram for the lone sack of Cousins but overall, it was a good performance for the O-line in allowing just that one sack, usually giving Cousins time to throw and opening up holes for Cook and Mattison.

5. The Vikings want to improve their third down offense after converting 4 of 13, but they also had the big fourth down conversion for the Jefferson TD. Defensively, they held the Packers to 3 of 9 on third down and 0 for 2 on fourth down.

6. After almost giving up a 75-yard TD pass on the first play (when rookie Christian Watson beat Patrick Peterson on a double move but dropped Rodgers’ perfect deep ball), the defense rose to the challenge, shutting out the Packers in the first half. The front seven put consistent pressure on Rodgers, sacking him four times and forcing several throwaways (and it certainly didn’t hurt the Vikings cause that the Packers were missing starting tackles David Bakhtiari and Elgton Jenkins along with starting receiver Allen Lazard). Coverage was good overall by the linebackers and secondary, although Cam Dantzler gave a lot of room several times on his side and will need to tighten things up against the Eagles’ better receiving corps. Harrison Smith had a nice pick.

7. The run defense wasn’t great as Aaron Jones and A.J. Dillon, two fine backs, combined for 94 yards on just 15 carries (6.3 yards per carry), and a couple of end-arounds hurt the Vikings. It was part of a bend-but-don’t-break strategy that yielded only seven points but must improve as the season progresses.

8. The Vikings made a terrific goal-line stand in the second quarter with two Harrison Smith stops followed by Za’Darius Smith and Harrison Phillips combining to tackle Dillon on 4th-and-Goal from the 1. On the play that clinched the win, Eric Kendricks broke up a 4th down pass from Rodgers to tight end Robert Tonyan with 3:50 remaining.

9. We know the key to this Vikings defense playing well will be Danielle Hunter and Za’Darius Smith staying healthy and being impact players as multi-time Pro Bowlers. They both were excellent in this game, delivering sacks, pressure on Rodgers, pass knockdowns, and stops in the run game. Defensive coordinator Ed Donatell moved them all over the defensive front to create mismatches.

10. A somewhat under-the-radar free agent signee—linebacker Jordan Hicks (from the Cardinals)—led the D with 14 tackles, a sack, and a forced fumble. He’s an upgrade from what the Vikings got out of Anthony Barr in recent years with his knee issues (Barr had three tackles for Dallas in their loss to Tampa Bay).

11. Donatell’s D allowed no points in the last two minutes of either half, which was a huge problem last season. Also a good indication of the solid play in all phases in the opener—only three penalties for 20 yards.

12. Special teams coverage was solid with no big returns allowed, but there was not a big impact by Vikings returners in this game. Greg Joseph had an excellent game with three field goals, including a career-high 56-yarder, and had no misses on field goals or PATs. Also, rookie punter Ryan Wright had a very good game with a 46.4-yard average and three punts downed inside the 20, along with perfect holds for Joseph.

Overall, a marvelous launch to the O’Connell coaching reign in Minnesota. Now another big test awaits in Philly—such is life in the NFL. Enjoy the big Packer win for 24 hours, and then move on.

1. Several surprises on opening Sunday: the biggest was the Giants’ upset of last year’s top AFC seed Tennessee 21-20 in Nashville. New Giants Coach Brian Daboll had the guts to go for the two-point conversion by Saquon Barkley for the late win that came down to a missed 47-yard field goal by Randy Bullock as time expired.

The second biggest upset was the Bears beating the 49ers 19-10 in rainy Soldier Field as Justin Fields won his duel with fellow 2021 first-round QB Trey Lance who will be looking over his shoulder more than before at Jimmy Garoppolo. Chicago is at Green Bay in Week 2 on Sunday night, a game that will be of significant interest to the Vikings and their fans.

Another semi-shocker–the Steelers intercepted Joe Burrow four times as they pulled off a 23-20 overtime upset on Chris Boswell’s 53-yard game-winning field goal after Cincinnati’s usually excellent kicker Evan McPherson missed a 29-yard potential game-winner in OT (and had an extra point blocked at the end of regulation).

2. There were several key injuries in Week 1—Steelers premier edge rusher T.J. Watt will be out at least a month with what appears to be a partially torn pec, but tests will confirm if it’s a partial or a more serious full tear. Eagles stalwart defensive end Derek Barnett suffered a torn ACL in Detroit. And a big blow to the Cowboys playoff hopes is Dak Prescott’s surgery on his throwing thumb which he injured in the loss to the Bucs, and he’s expected to miss 6-8 weeks. The Vikings host the Cowboys in Week 10, and we all recall Prescott’s backup Cooper Rush beating the Vikings in a damaging loss last season.

Here’s When XRP Will Take Off, David Gokhshtein Believes, And Even More Will Happen Then