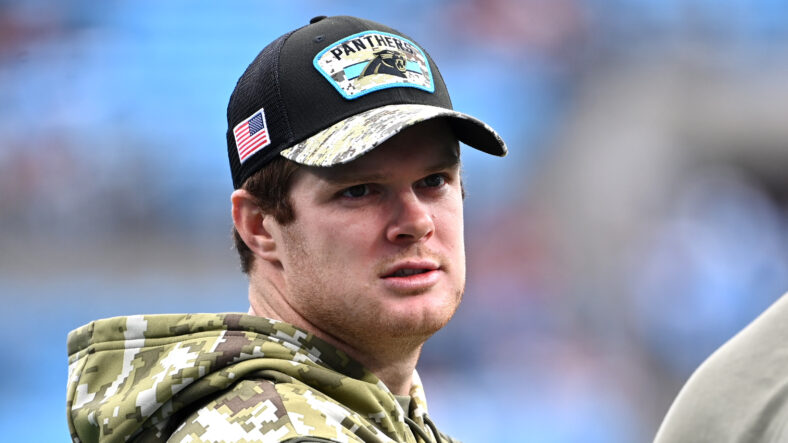 VikingsTerritory‘s Purple Rumor Mill is a two-day chronicle each week. All the week’s rumors are lassoed and plopped in two spots — articles on Saturday and Sunday — for review. Today is the July 9th edition.

Rumor: The Vikings should trade with the Carolina Panthers for Sam Darnold.

This idea was advanced by an elite NFL mind, considered the Godfather of Fantasy Football by some, Paul Charchian.

Indeed, Darnold may be a better backup quarterback than Sean Mannion or Kellen Mond, and the Vikings, in a vacuum, would be wise to land Darnold as QB2.

However, Darnold is scheduled to earn $18+ million in 2022, and he emphatically is not worth that price. Plus, the Vikings cannot afford it and would have to mandate the Panthers swallow three-fourths of Darnold’s salary, which they will not do.

If Darnold’s 2022 earnings were around $4 million, sure — pull the trigger. Yet, Darnold is earning almost $20 million this season, exiting the Vikings from hypothetical trade talks.

The “holy crap” upside came from Mike Wright of The Fantasy Footballers Podcast. Wright said, “Zimmer is about as curmudgeony and it will be established as you can possibly get in the NFL. With him out and this new [offense], Kirk Cousins could be one of those surprise quarterbacks where you’re like holy crap, Kirk Cousins was the QB6 on the year.”

If Kevin O’Connell can do with Cousins what Sean McVay did with Matthew Stafford, of course, Cousins’ stock should soar. The “holy crap” on Cousins is merely more fodder and enthusiasm about the Vikings potential with an offense-first head coach for the first time since Brad Childress.

Cousins could experience a career year. And even if he doesn’t, he’s still good for 4,000+ passing yards and 30+ touchdown passes as the sun rises. Either way, Cousins is set up for success.

Rumor: The Vikings will be the NFL’s most improved team.

On the Vikings as the league’s most improved team, the source was Colin Cowherd of Fox Sports. Cowherd also famously said in June that the Vikings could finish 16-1.

Here are the details on Cowherd’s most-improved diagnosis for Minnesota, “Half the teams that made the playoffs last year will not make the playoffs this year. I think the Minnesota Vikings will be the most improved team in the league with an offensive head coach.”

Like Cousins’ “holy crap” potential, the key is O’Connell clicking right away as head coach. If the Vikings made a wise hire, you’d see the holy-crap for Cousins and Cowherd’s prophecy come to fruition.

The Vikings Top Offensive Performers vs. Raiders, per PFF