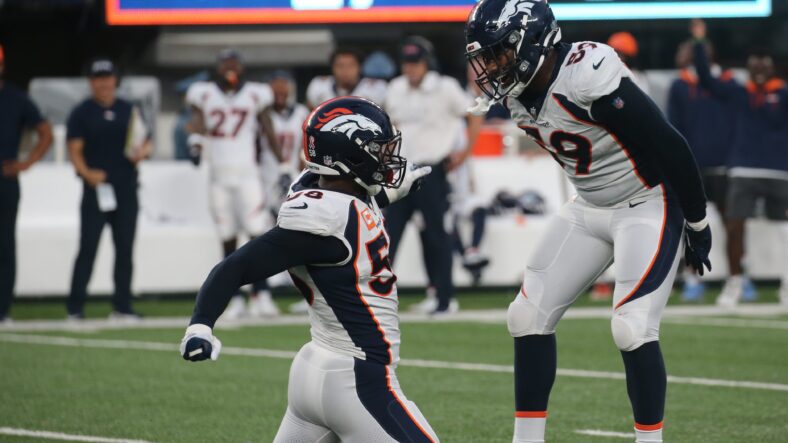 VikingsTerritory‘s Purple Rumor Mill is a two-day chronicle each week. All the week’s rumors are lassoed and plopped in two spots — articles on Saturday and Sunday — for review. Today is the July 30th edition.

Rumor: The Vikings would be wise to trade with the Denver Broncos for EDGE Malik Reed.

This idea came from Brent Sobleski of Bleacher Report. He theorized one trade every NFL should make, and for the Denver Broncos, he recommended EDGE rusher Malik Reed be shipped to Minnesota.

Consider this one some pundit’s best-case scenario — not a probable outcome.

Still, the Vikings could use an extra pass rusher. After the gruesome twosome (a compliment) of Danielle Hunter and Za’Darius Smith, the depth is filled with hopeful-maybe types in Patrick Jones II, D.J. Wonnum, and Janarius Robinson.

General manager Kwesi Adofo-Mensah would probably have to send a 4th-Rounder to Denver for Reed. Overall, this is unlikely to occur, but the sentiment of another credible pass rusher on the Vikings checks out.

Rumor: JC Tretter is now likely to sign with the Tampa Bay Buccanneers after the injury to Ryan Jensen, disqualifying hopes he’d eventually land in Minnesota.

Ryan Jensen appears to be lost for the 2022 season — or at least several months — and the Buccaneers may not wish to leave anything to chance. Tretter, an absolutely phenomenal pass-blocking center, is the almighty free-agent contingency plan.

Curiously, Tretter has signed nowhere, even though he’s been available on the open market for over four months. Some folks have questioned his health. By this time, the questions are fair, as there is no other good reason for Tretter to marinate this long on the free-agent wire.

Vikings fans have clamored for this guy since St. Patrick’s Day. If Tampa Bay swoops and signs him to replace Jensen, Minnesota has no one to blame other than itself. Perhaps the Vikings new coaching staff really does love the platter of Garrett Bradbury, Ed Ingram, Chris Reed, and Austin Schlottmann as center candidates.

Rumor: Andrew Booth has the juice to steal a starting CB job in September.

If a few days of training camp could end debates and determine roster spots, it would be silly to deny Booth a starting job. The rookie corner has looked marvelous out of the gate at Vikings training camp, putting Patrick Peterson and Cameron Dantzler on notice, although he respects those two to the utmost.

This is a terrific problem to have as a Vikings defensive coaching staff — too many good CBs.

We predicted Peterson and Dantzler would win the two outside starting cornerback jobs, and we might’ve got that badboy wrong.

Don’t Rule Out a Vikings Trade in the Coming Weeks

Our Staff Prediction for Vikings at Bills