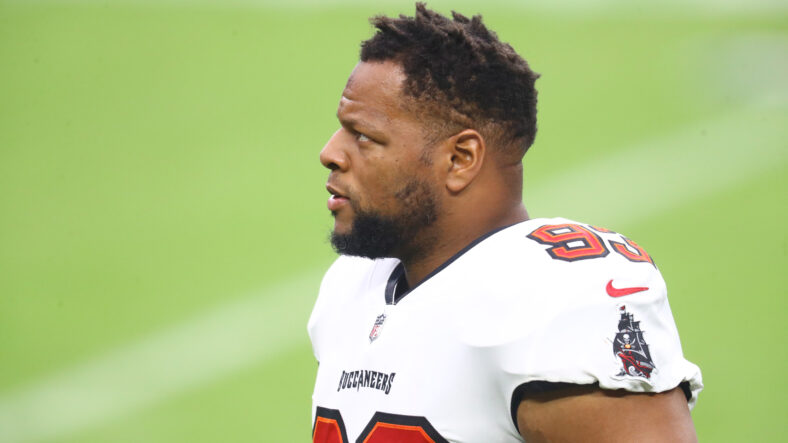 VikingsTerritory‘s Purple Rumor Mill is a two-day chronicle each week. All the week’s rumors are lassoed and plopped in two spots — articles on Saturday and Sunday — for review. Today is the June 25th edition.

Rumor: The Vikings have spoken with Ndamukong Suh about a free-agent relationship.

The Vikings interest in Suh is real and was corroborated by Tyler Dragon of USA Today.

Minnesota has around $11 million in cap space, enough to sign Suh if both parties are on the same page. Armon Watts is slated to start where Suh might take over, so the Vikings coaching staff must decide how much of an upgrade Suh can provide. He had a career-low 49.4 grade from Pro Football Focus in 2021.

Rumor: The Seattle Seahawks, not the Vikings, are interested in the services of Baker Mayfield.

The Seahawks indeed have renewed interest in Baker Mayfield, according to Aaron Wilson from Pro Football Network.

Dan Graziano noted two weeks ago that the Vikings should be interested in Mayfield, possibly preparing for life after Kirk Cousins. Minnesota’s general manager, Kwesi Adofo-Mensah, and Mayfield were coworkers in Cleveland for two seasons. Ergo, perhaps there’s an existing relationship — is the working theory.

On the whole, though, Mayfield becomes a free agent in March, meaning the likelihood of the Vikings trading for the Oklahoma alumnus is slim.

Rumor: Kyle Rudolph would like to rejoin the 2022 Vikings.

This is absolutely correct and was confirmed by Rudolph’s lips.

Rudolph was asked by KFAN‘s Paul Allen if he’d like to join the 2022 Vikings, and the longtime Viking replied, “Absolutely. I said it when we left here that Minnesota is always home. That’s never been brought to my attention more than when we came back from New Jersey after last season.”

Minnesota needs a TE2, but it is unclear if the Vikings are interested in Rudolph. Why? Because the front office and coaching staff are totally different from Rudolph’s first stint in Minnesota. The Spielman Vikings would probably welcome Rudolph back, but these aren’t the Spielman Vikings.

Stay tuned. Rudolph wants to be in Minneapolis, and the Vikings are deficient at TE2. These two items could merge if common sense reigns.

Man arrested in Italy after threats to adulterate food products

It’s Time for Ed Donatell to Be Done

A Vikings Win over Giants Would Be Historic. Here’s Why.