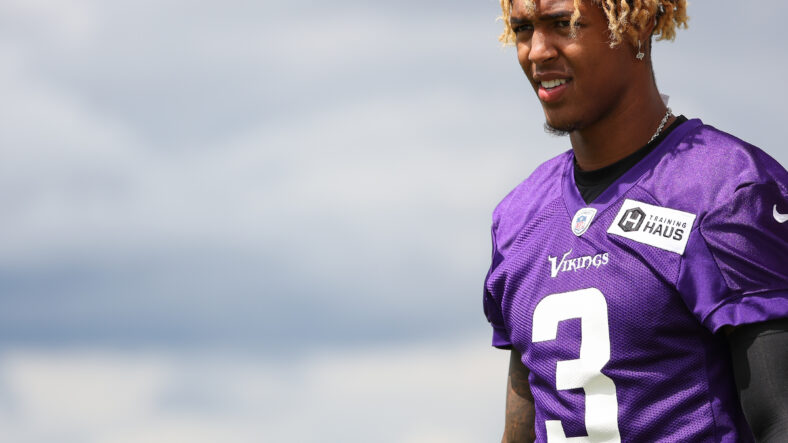 VikingsTerritory’s Purple Rumor Mill is a two-day chronicle each week. All the week’s rumors are lassoed and plopped in two spots — articles on Saturday and Sunday — for review. Today is the September 24th edition.

Rumor: Cameron Danzlter was benched for performance on Monday night.

Nope. This was the theory when rookie corner Akayleb Evans was in the game during the 4th Quarter of Monday Night Football. But unless defensive coordinator Ed Donatell is bending the truth, Dantzler was not benched for performance. That was a “last year” year thing, as Dantzlter inhabited a doghouse via the previous coaching regime to start the 2021 season.

Donatell told reporters, “We’ll make substitutions different than that. You may see a different young player in certain weeks that we just want to take a look at because our young players are going to be in there no matter what. They have to play during the season.”

The Vikings defensive bossman also said, “But he’ll be back in there ready to go this week.”

Nothing to see here. Fan-inspired theories were incorrect.

Rumor: Vikings coaches really didn’t “yell” or go negative about the team’s loss to the Eagles.

This is correct. It is unclear if the previous regime laid into players after losses — especially those as bad as the Eagles variety in Week 2 — but this quote from Adam Thielen to reporters is telling, “I think it even gave us more confidence when we saw how guys reacted to a tough loss or tough game. You didn’t see guys yelling at each other on the sideline. You didn’t see coaches yelling at players. You didn’t see any negativity in the locker room after the game, on the plane.”

The Vikings had a short week, so dwelling on the shellacking courtesy of the Eagles was evidently counterproductive. It may also be an indicator that this brand of coaching staff is even-keeled.

Rumor: The Vikings wanted Ndamukong Suh during the summer to prevent precisely what is happening through two weeks of 2022.

Minnesota and Suh could never meet in the middle this summer amid contract negotiations. And now, through Week 2, the Vikings own the NFL’s 32nd-ranked run defense per DVOA. Woof.

So, the Vikings can do three things:

Option #3 should probably be on the agenda. The Vikings don’t have much cap money, and the team may not look like a Super Bowl contender to Suh at the moment.

Still, it would’ve been nice to land Suh, who usually excels against the run — especially when Minnesota released Armon Watts in August.

Vikings MNF Struggles on the Road Are Not Over