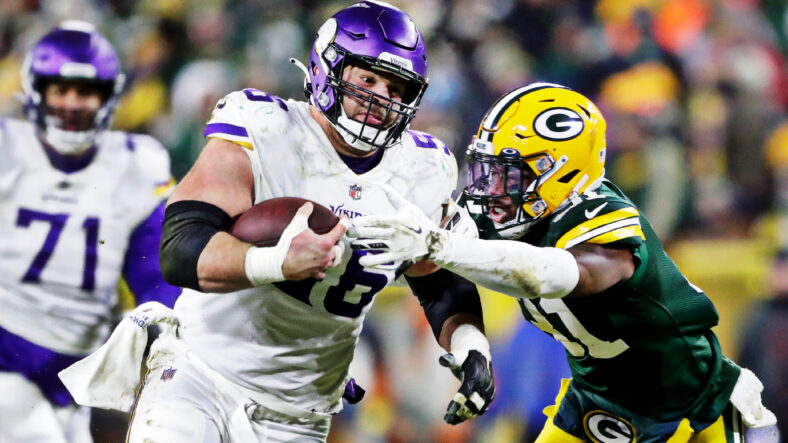 VikingsTerritory‘s Purple Rumor Mill is a two-day chronicle each week. All the week’s rumors are lassoed and plopped in two spots — articles on Saturday and Sunday — for review. Today is the August 7th edition.

Rumor: Garrett Bradbury is not necessarily the starting center for the Vikings as of early August.

This development is real.

Bradbury is not the preordained starting center despite the Vikings new coaching staff’s rosy comments about him in the spring. If Bradbury falters, free-agent Chris Reed could be the next man up.

Everyone in the Vikings orbit operates under the pretense that a fresh coaching staff will “fix” Bradbury, who struggles with pass protection. However, if he isn’t fixable — his training camp hasn’t been stellar — Minnesota won’t stubbornly toss him on the field to flounder. The Vikings ownership hired new leadership to end that practice.

Rumor: The Vikings will explore an additional TE after Irv Smith’s thumb surgery.

Exploring an extra free-agent tight end merely seems like the common-sense solution after Smith’s brush with injury. However, the Vikings don’t appear to be in any rush to sign Eric Ebron, Jared Cook, or Jimmy Graham.

The team likes who it has on the roster. Johnny Mundt has played well at camp, while Kirk Cousins has complimented Zach Davidson to the utmost.

This is the franchise that turned Tyler Conklin into a mini-star one year ago and evidently believes it can follow suit with Mundt or Davidson.

Otherwise, yes, decent free-agent TEs are waiting to be scooped from the open market.

This rumor was generated from the roster additions of Jesse Davis, Ed Ingram, and Chris Reed.

The Vikings didn’t give Davis much of a look in 2021 — for better or worse — and now they employ players who are better or have more experience at offensive guard. Davis was a “Spielman pick” anyway, reportedly against the wishes of the Vikings coaches and scouting crew.

Put bluntly, Kwesi Adofo-Mensah signed free-agent and draft solutions that are a safer bet than waiting for Davis’ upside to materialize.

He will probably be cut at the end of the month.

Lots of news and notes about federal prisons as leadership transitions

About That 16-Win Season for Vikings