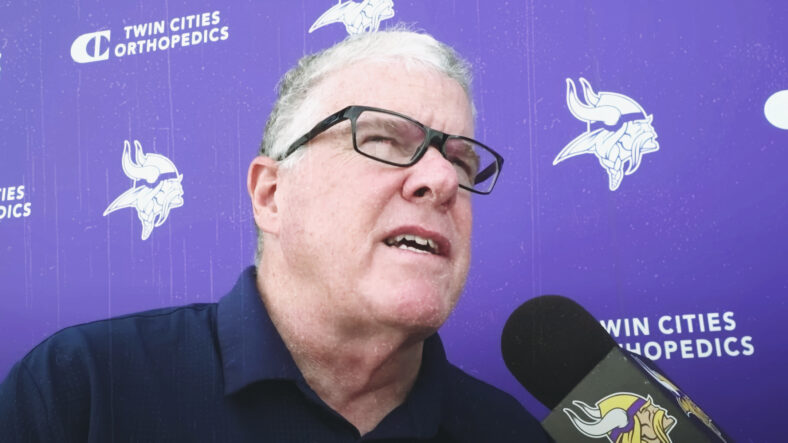 The NFL regular season is less than four weeks away, and NBC Sports’ Peter King has one “vital” Minnesota Vikings player in mind.

Indeed, Darrisaw will be an integral part of the Vikings new-look offense. The steam surrounding his sophomore campaign is already so pronounced that Minnesota’s coaching staff has taken the semi-dangerous path and omen of comparing Darrisaw to Trent Williams, a sure-fire future Hall of Famer. Receiving juxtapositions to Williams is assuredly better than the coaching staff hinting “this guy needs a lot of work,” but Vikings fans remain scarred from the Matt Kalil experience. Kalil, also a left tackle, was phenomenal as a rookie in 2012 — and then that was it. He never regained form, and the rookie season wound up an unabashed outlier season.

Regardless, Darrisaw doesn’t have to be Kalil despite Vikings enthusiasts’ skepticism. That is merely a fear from the dark days. Darrisaw compiled a 71.9 grade from Pro Football Focus as a rookie, a tremendous building block for the next level. And if musings out of Vikings training camp are correct, the impressive PFF score seems on track to tick higher.

The Vikings live in a bizarre OL spot entering the 2022 season, with the tackles — Darrisaw and teammate Brian O’Neill — firmly in good shape. Meanwhile, the innards of the offensive line are dicey. Ezra Cleveland appears to be a long-term solution at left guard, but the center and right guard quandaries persist. Garrett Bradbury’s training camp hasn’t been stellar, and Minnesota is in the process of determining the identity of the RG. Kevin O’Connell’s team essentially has the “hard part” down — finding good bookend tackles — and hoping the center and right guard problems stabilize.

Moreover, on King’s point, Darrisaw is vital because if he regresses, it’s back to the drawing board for a franchise desperately thirsting for offensive line stability.

Load the Box: This Game Means Something! (Green Bay Preview)