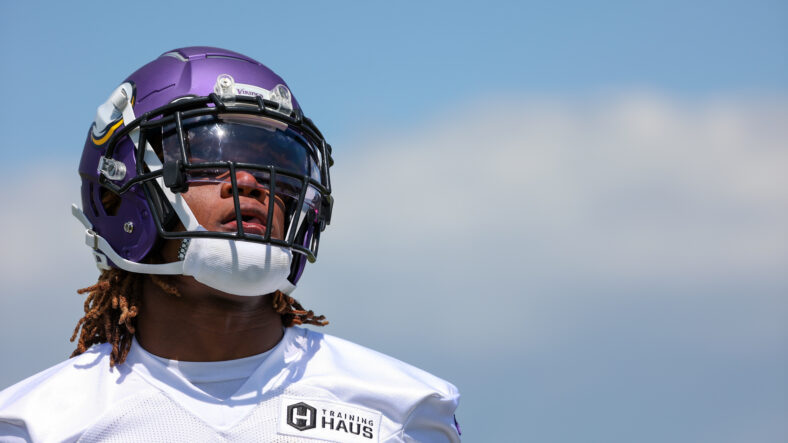 Every year rookies come to training camp and begin to run plays with the second or third team. Even first-round picks have to wait for their turn. They have to take the starting job by force, while the veterans always are in a better position at the beginning of camp.

That is happening in Vikings camp. Right guard Ed Ingram started camp splitting second-team reps with Chris Reed. Now, Jesse Davis is still getting all first-team reps when he’s on the practice field. He had two veteran’s rest days, however, and the first time Reed got his snaps, the second time Ingram.

Cornerback Andrew Booth is in a similar spot. Veterans Patrick Peterson and Cameron Dantzler are the two outside CBs with the first team, while rookies Akayleb Evans and Andrew Booth Jr. run with the second unit. Booth, especially, is interesting. He was a second-round pick and has the talent to start immediately. Just like Ingram, he has to be patient and continue to work hard. Even the first-rounder is in a similar situation.

Kwesi Adofo-Mensah selected a safety with his first pick as the Vikings’ general manager after a controversial trade with the Lions. The national champion from Georgia, Lewis Cine, joined a safety room with potential future Hall of Famer, who is coming closer to the end of his career but can still play at a very high level.

Before the draft, the expectation was that fellow safety Camryn Bynum would start next to Smith. Despite just going into his second season, he is technically a veteran. The converted college cornerback was a fourth-rounder in 2021 and had to step up once Smith tested positive for COVID. Bynum played, and he delivered. He was one of the best players in an unfortunate loss against the Ravens.

It must have been a slap to his face when the Vikings drafted a safety in the first round. However, Bynum is still in the pole position to be the starter on September 11th against the Green Bay Packers. He has to struggle in camp or preseason for Cine to get the nod. The other chance for a change is if Cine performs at a very high level. To this point, however, reports indicate good practices by Bynum.

Cine knows that and confirmed his patience in an interview with Chris Tomasson from the Pioneer Press. “My goal is to contribute to the team each and every way I can whether it’s special teams, defense, wherever I can,” said Cine.

Lewis Cine about helping the team

Cine has a great team-friendly look at the situation. First-rounders usually start and rarely play special teams. The fact that he’s willing to do whatever is necessary to help the team is a great mindset.

I trust [defensive coordinator Ed] Donatell. I trust that he’ll put me where I help the team the most, and at the end of the day I’ll put my best foot forward and compete. … Bynum makes me better, and I make Bynum better.

It truly sounds like a great competition without any bad blood between the two. Bynum still has the lead, but it’s early in the process, and Cine could overtake him at any time. The good news is that they seem to make each other better.

Rookie Cine is a talented player. He runs a sub 4.4 40-yard dash, and it shows on tape. He can diagnose plays incredibly fast and is extremely quick to the ball. His aggressive tackling ability can also help the defense build a new culture. Cine called defenses for the Georgia Bulldogs, so his football IQ should be up to speed. The reports coming out of camp are mostly positive ones about the rookie.

At times, the Vikings tried out playing all three safeties simultaneously. That can be interesting to cover a specific tight end in the passing game. It can also mean that one safety plays as a slot cornerback or linebacker to add more speed to the field. The package can undoubtedly throw off opposing offenses. All three are excellent players, and the more good players are on the field, the better.

Cine still has a chance to usurp Bynum before the season starts, but his team-first mindset is perfect. He might begin the season as a backup and rotational player and replace Bynum later in the year. No matter the timeline, the Vikings drafted a good football player with a great mindset.

Can the Vikings Salvage Their Rookie Class?