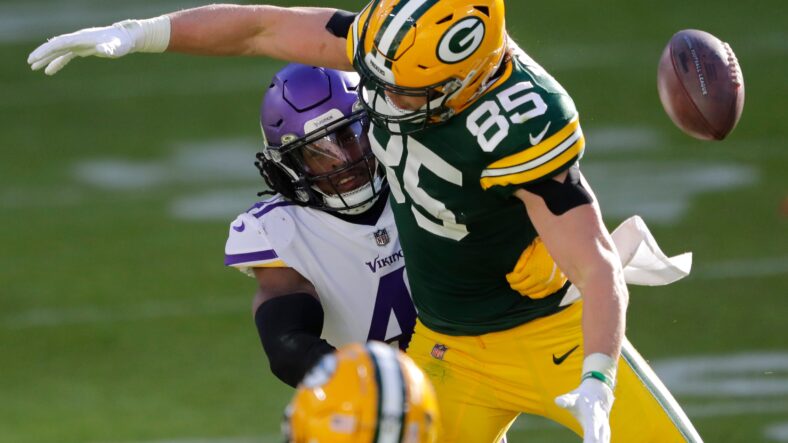 The Vikings open their 2022 season at home in U.S. Bank Stadium against the Green Bay Packers on September 11th. One of Aaron Rodgers’ best weapons will be ready to face the newly formed defense coordinated by Ed Donatell.

Since Mike Zimmer arrived in 2014, the series between the Vikings and the Packers has been almost split. The Packers won eight of 16 games, and the two teams tied once. In the last two seasons, each team has won one matchup per year. Kevin O´Connell will coach his first NFL game as a head coach against the Packers in Week 1.

Even before the Packers lost one of the elite receivers in the NFL, Davante Adams, Tonyan was a valuable target for Rodgers’ passes. The former Indiana State college athlete was an undrafted rookie in 2017. Basketball legend Larry Bird is a fellow alumnus. The Lions, another NFC North division rival, signed him and later cut him before the season even started.

He later spent parts of the 2017 season on the Packers practice squad and earned a contract for 2018. He was not a big factor in that year, but his role increased each season until he was an excellent contributor to the 2020 Packers that finished the season 13-3. Tonyan had 52 catches for 586 yards and impressive 11 touchdowns.

When the Vikings won at Lambeau Field in 2020, Tonyan was the most productive Packers receiver with five receptions for 79 yards. Dalvin Cook, however, had the best game of his career, scored four touchdowns, and managed to gain 226 scrimmage yards.

In 2021, Tonyan’s numbers decreased, especially the touchdowns, but he was still a solid option in the passing game. In Week 8, the tight end tore his ACL against the Cardinals. But now, he’s apparently healthy enough and will face the Vikings in September.

The Packers lost two big names in the 2022 offseason. They cut Za’Darius Smith — who later signed with the Vikings and will wreak havoc in the defensive backfield together with Danielle Hunter — and traded star receiver Davante Adams to the Raiders. Adams hurt the Vikings a lot during his tenure in Wisconsin. He is the all-time leader in touchdown catches against the purple team with 13, three more than the players that are second.

They did not only lose Adams but also couldn’t re-sign Marquez Valdes-Scantling. Since he arrived in Green Bay, he only trails Adams in receiving yards for the franchise. The Packers lost their top two pass catchers.

In the draft, the team traded up with the Vikings to select Christian Watson with the 34th pick. The speedy North Dakota State player and the veteran Sammy Watkins must replace some of the missing production. Maybe even Robert Tonyan can increase his usage again.

No matter who plays receiver, quarterback Aaron Rodgers will lead a dangerous aerial attack. The Vikings’ new defense must be prepared and play at a high level to beat the future Hall of Famer.

Ethereum Merge to Be Executed on Second Major Testnet: Details

Explained: State of the Vikings thru 10 Weeks

Does a Win vs. DAL Finally Get Vikings Some Respect?