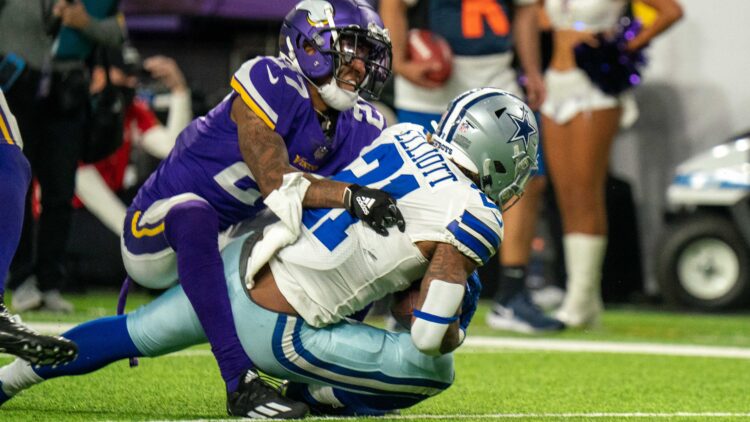 The Vikings come off a statement win over a Super Bowl favorite on the road in Buffalo, which ties them for the NFL’s best record at 8-1. The Cowboys blew a 14-point lead and lost in OT to the Packers, who had dropped five straight games. Dallas fell to third place in the NFC East at 6-3.

The Vikings host the Cowboys on Sunday as the last NFL team unbeaten at home (4-0). Yet the Vikings are a 1 ½ point underdog.

How does that make any sense? Start with the initial betting line is determined by where Vegas thinks the gamblers will lean, and then the line adjusts as the bets roll in. Thus what was initially a 2 or 2 ½ point spread in Dallas’ favor has fallen to 1 ½ as money has come in on the Vikings.

The Cowboys are always overhyped, which contributes to point spreads often undeservedly in their favor, as is the case this week. And perhaps part of the line setters’ reasoning is that the Cowboys have beaten the Vikings the last two seasons at U.S. Bank Stadium with backup quarterbacks (Cooper Rush last year and Andy Dalton in 2020 after the Vikings beat Dak Prescott in Dallas three years ago). But isn’t it obvious by now that this is a very different Vikings team with players and coaches who have confidence they’ll come through in the fourth quarter and OT to win a game?

Who is favored and by how much makes no difference to the players unless Kevin O’Connell wants to play the “no respect” card and tries to motivate his team by saying they are still undervalued as home underdogs despite a monumental road win over the Bills.

Here are my keys to the Vikings beating the Cowboys in what, technically but not realistically, would be an upset:

1. Run the ball effectively against a shaky rush D: Dalvin Cook comes off a 119-yard rushing performance in Buffalo and faces the NFL’s No. 29 run defense. The Cowboys were gashed by the Packers for 207 yards on the ground last Sunday, with Aaron Jones gaining 138 yards and 1 TD. It will help if an excellent run blocker in tackle Christian Darrisaw can return from his concussion (and he practiced Thursday on a limited basis which is good news for the Purple), although Blake Brandel played well when he came in. But Darrisaw is playing at a Pro Bowl level (as is right tackle Brian O’Neill).

The Vikings will likely face an old teammate in linebacker Anthony Barr who was inactive last week with a hamstring injury but has been relatively productive with 31 tackles this season.

2. If Brandel starts or relieves Darrisaw, help him with double teams against two of the league’s top pass rushers in Micah Parsons (8 sacks) or DeMarcus Lawrence (5 sacks but he has missed practice this week with a foot injury). Brandel was helped last week with Cook or tight ends chipping on Von Miller, and that should be the plan again if he starts. O’Connell said of Brandel: “I think he deserves a ton of credit for what he went out and did and it gives him a ton of confidence that he can step in.”

O’Connell added that Brandel could play multiple spots, and I think he should step in at guard in games when Ed Ingram is struggling. And speaking of Ingram, he needs to not step on Kirk Cousins’ foot as he did twice in Buffalo (almost causing turnovers).

This is another big test for the Vikings offensive line, especially in pass protection against the Cowboys, who lead the league with 35 sacks. Ingram may well need help inside with double teams.

3. Don’t forget the reigning NFC Offensive Player of the Week: we’re talking Justin Jefferson, of course, after his monster game in Buffalo. Jefferson was held to two catches for 21 yards in last year’s game against the Cowboys, largely because Kirk Cousins was under pressure on a lot of his dropbacks. He was only sacked once but was pressured and hit nine times as he threw for only 184 yards with lots of checkdowns to his backs and tight ends.

If the Cowboys put corner Trevon Diggs (Stefon’s younger brother) on J.J., it will be a matchup of Pro Bowlers, and Diggs led the NFL with 11 interceptions last year and has three picks this season. But Diggs also is a gambler, so Jefferson could break open with his great route running, and we know Kirk is now willing to give J.J. more contested catch opportunities which he feasted on last week.

A side note on Jefferson: he’s on pace to be the NFL’s first 2,000-yard receiver if he continues on his average so far of 118 receiving yards per game. This will be a challenging two-game stretch against the Cowboys strong pass defense and then the Patriots’ Bill Belichick, who surely will double J.J. all game long.

4. Stop the run and get after Dak: after all his injury problems the past few seasons, Prescott is no longer the running threat he once was which is good news as Josh Allen, Justin Fields, and Jalen Hurts have had success against the Vikings D this season. Tony Pollard (621 rushing yards, 6 TDs, two straight 100-yard games) is now the better back compared to Ezekiel Elliott, who is coming off a knee injury. It would help if Dalvin Tomlinson (calf) could return on the D-line, but James Lynch did ok last week along with Khyiris Tonga, and Harrison Phillips is coming off a very good game against his former team.

This is a great opportunity for ace Vikings pass rushers Za’Darius Smith (9 ½ sacks) and Danielle Hunter (6 sacks) to make a significant impact on the national TV stage. They’re always a key on D, and I think they will make it difficult for Prescott.

5. Peterson on Lamb?: CeeDee Lamb had a big game in Green Bay (11 catches for 150 yards, 2 TDs), and he caught six passes for 112 yards against the Vikings in 2021. It appears the Vikings have issues at second corner — Akayleb Evans is in concussion protocol, and Cam Dantzler is on I.R. for three more games, so rookie Andrew Booth Jr. may get his first start, and he was shaky in coverage when he relieved Evans last week (but perhaps Duke Shelley can help as he did with a great pass breakup in OT last week).

I’d say it behooves defensive coordinator Ed Donatell to have Patrick Peterson follow Lamb all over the field, as Peterson is coming off his terrific two-interception game and is clearly the Vikings best option to cover Lamb (with safety help as needed). The good news is Amari Cooper is now in Cleveland, and he hurt the Vikings last year (8 catches, 122 yards and the winning TD reception from Rush).

6. Win the turnover battle: it’s been a key to the Vikings seven-game winning streak, and they had four takeaways last week in going plus 2 in turnover ratio. Minnesota is now plus-8 (second in the league), and the Cowboys are plus-6, so both teams are strong in this area which will be a key to who emerges victorious.

Cousins needs to be more careful than he was with the two bad picks last week, but he did come through with a fine and winning performance overall. Prescott also will be asked by Coach Mike McCarthy to protect the ball better than he did in the Packer loss with his two picks and he wasn’t clutch late.

7. Greg Joseph can’t miss a PAT: it’s odd that he’s 12 for 12 in field goals under 50 yards but has missed four extra points to unfortunately lead the league. His missed PATs haven’t cost the Vikings any games so far, but it’s made things tighter. This will likely be another close game, and the Vikings need their kicker to perform well, as Cowboys kicker Brett Maher is having a fine season (15 of 17 field goals, 22 of 23 PATs). Is this the game Kene Nwangwu or Jalen Reagor run back a kick or punt all the way?

Jeff’s Prediction: This is the first of three straight at home against winning teams for the Vikings, with the Patriots and Jets up next. Both the Vikings and Cowboys will have a short week before hosting games on Thanksgiving, so look for some starters to be pulled if the game is unexpectedly a blowout either way.

Both teams see a little opening after the Eagles lost to the Commanders. The Vikings are now tied with Philly for the NFC’s top seed and a first-round bye, while the Cowboys remained two games behind the Eagles in the NFC East with eight games to play (including a rematch with the Eagles in Dallas on Christmas Eve after the Eagles won in Week 6).

The Vikings-Cowboys games the past three years have all been determined by one score, which should be a good omen for the Vikings, given their outstanding 7-0 record in such games this season. I think the Cowboys, as usual, are overrated. I expect the home crowd to be excited and juiced up with the 3:25 pm start. They’ll make a difference this time in creating a few false starts and will help the Vikings pass rushers get a jump on Prescott and the Dallas O-line. Prescott threw two picks in Green Bay, and I think he’ll throw a couple more this week.

It won’t be easy for the Vikings offense, but I think they’ll be able to run enough to open things up for the passing game, and perhaps they’ll be aided by Parsons battling through injuries this season (ankle and shoulder) as he had no pressures in Lambeau for the first time in his two year career. It’s another game where the Vikings will win the turnover battle and the game by a 24-20 score and move to 9-1.

1. The Vikings will keep an eye on their next two opponents who meet in Foxboro. In the longest current winning streak for one NFL team over another, the Pats have beaten the Jets 13 straight times, including 22-17 at the Meadowlands three weeks ago. Bill Belichick knows how to fluster young QBs, and Zach Wilson threw three picks last time. I see a repeat this week, and the Vikings hope it will be a very physical game before the Patriots travel here on a short week.

2. The Chiefs should close out the AFC West race by beating the Chargers in L.A. on Sunday night.

3. And sorry to say Deshaun Watson is back at practice with the Browns as his suspension for violating the NFL’s personal conduct policy nears an end. He’s expected to start against his former Houston team on December 4 when the 11-game suspension ends.

How Can Businesses Use Smart Contracts?

Quiz! Should you join Contiki “solo”, with a pal or with the squad?

The Vikings Should Dominate the Trenches Against the Bears

How Is the Jalen Reagor Experiment Going?