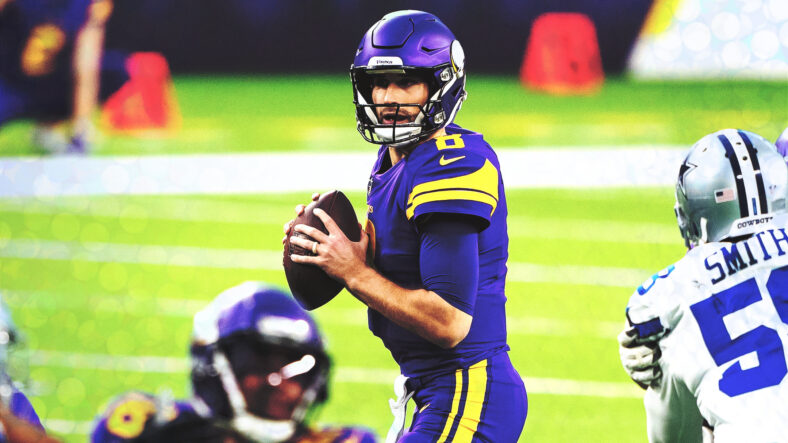 Minnesota Vikings fans are accustomed to their quarterback throwing about 4,000 passing yards and 30 touchdowns per season over the last four years. And while some Vikings faithful don’t believe that is enough for Kirk Cousins’ pricetag, similar production is on the way, according to Vegas oddsmakers.

BetOnline.ag circulated over-unders for all NFL quarterbacks this week, excluding a handful of teams with unknown factors at the position, like the Seattle Seahawks, Pittsburgh Steelers, and Cleveland Browns. Because the Vikings are firmly committed to Cousins through the end of the 2023 season, his prop bets were available.

For starters, though, these are yearly averages from Cousins since he became a full-time starter in 2015:

And, these were Cousins numbers from the ill-fated 2021 season that caused the terminations of Rick Spielman and Mike Zimmer:

With a new coach and potentially enhanced offensive line, per BetOnline.ag, these are the wagering odds for Cousins in 2022:

Or, one can read the numbers this way:

The 35-million-dollar question asked by Vikings enthusiasts — is that impressive and typical statline from Cousins good enough to nudge the team into the playoffs? The standalone statistics from Cousins are undoubtedly worthy of playoff contention, but during the last two seasons, the Vikings postseason prospects have been undone by suspect offensive line pass protection and a severely diminished defense, unrecognizable from the 2014-2019 versions.

Thankfully for Cousins’ sake, he’s now partnered with a former coworker in O’Connell. The two worked together in 2017, with O’Connell as the Commanders quarterback coach.