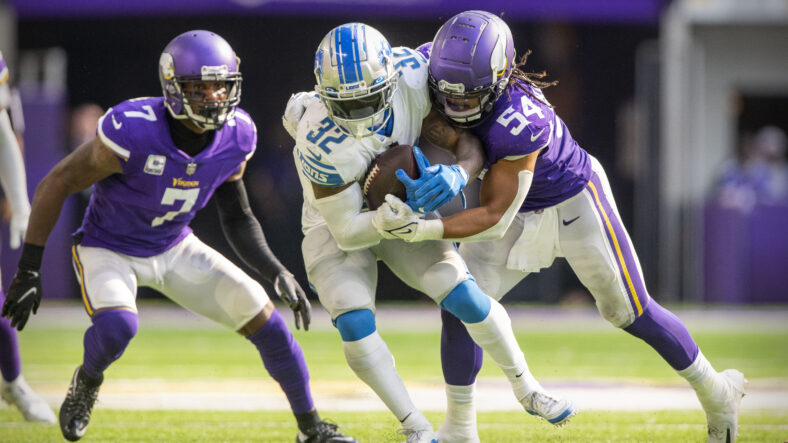 After ranking near the bottom of the NFL in terms of wide receiver talent, the NFC North ranks second among all eight divisions when it comes to running backs, according to Jordan Dajani from CBS.

In the last decade, the Minnesota Vikings have led the four NFC North teams in rushing yards and touchdowns. But it doesn’t stop there, as the Vikings also lead the division in rushing yards since they were founded in 1961 or on any other date after that year. The purple organization had some excellent runners over the years. It started with Bill Brown, who joined the Vikings in 1962. 11 years later, the franchise drafted the versatile back Chuck Foreman 12th overall, and he turned out to be a special player for the team. Later, Robert Smith starred in the explosive 1998 offense before Adrian Peterson became a Viking in 2007. Ten years later, he was replaced by Dalvin Cook, but the 2012 MVP still holds all franchise records in terms of rushing.

Dalvin Cook is still the best running back in the NFC North, but the other teams have some excellent players at the position.

David Montgomery leads the Bears’ backfield. The 2019 third-rounder reached 1,000 scrimmage yards in each of his first three seasons and scored 24 touchdowns in that time. Montgomery will have a significant role in 2022. The receiving corps is depleted, and someone has to take the burden off Justin Fields. He might not belong in the group of elite backs, but he’s a capable player. Opponents have to account for the runner.

Behind Montgomery, the Bears have 2021 rookie Khalil Herbert. He scored twice in his rookie campaign and had 529 scrimmage yards. He could very well have a bigger role in his second season.

The Packers relied heavily on Aaron Rodgers in the last decade, but now they have a great duo of running backs. Aaron Jones and AJ Dillion might be the best pair of runners in the league. Jones reached 1,000 scrimmage yards and 10 touchdowns easily in each of the last three seasons. Only Derrick Henry scored more scrimmage touchdowns in that span in the NFL. Jones is a big receiving threat and scored six touchdowns in the passing game last season.

Dillon, however, is a classic powerful back who is best used by running the football. After a slow rookie season, Dillon had a strong 2021 campaign in which he also reached 1,000 scrimmage yards and scored seven touchdowns. Surprisingly, he also showed his receiver skills in the passing game.

The top back in Detroit is D’Andre Swift. He was a second-round pick out of Georgia two years ago. Despite only playing in 26 games, Swift scored 17 touchdowns and gained 1,947 scrimmage yards. He is one of the best receiving backs in the NFL. In three games against the Vikings, Swift gained 271 yards and scored twice.

Jamaal Williams, a free agent signing in the 2021 offseason from the Packers, is one of the most consistent players in the NFL. In his first five NFL seasons, the running back always had between 460 and 601 yards per season. In addition to that, Williams never had a fumble in the NFL until the Vikings forced one last season. The Lions, however, kept possession of the ball and eventually won the game.

The Vikings traditionally have a great backfield. Dalvin Cook is one of the team leaders. The 2017 second-round selection of former GM Rick Spielman showed instantly elite potential. In Week 4, Cook tore his ACL and missed the rest of the 2017 season. When he came back in 2018, he didn’t look as dynamic and didn’t have a good season. In 2019, however, Cook was back to full strength and since then has been dominant. In the last three seasons, only Derrick Henry recorded more rushing yards and touchdowns than the Vikings’ leading rusher. The offense might become more pass-heavy, but his impact on defense can´t be denied, and his role in 2022 will still be important.

Alexander Mattison is Cook’s primary backup. He had to fill in whenever Cook missed time. 1,822 scrimmage yards and 18 touchdowns in three seasons prove his status as an excellent backup. If he keeps that job remains to be seen. Mattison enters his contract year, and the Vikings drafted a running back in each of the last two drafts. Ty Chandler and Kene Nwangwu possess a different level of speed than Mattison.

Only Trailing the AFC North

The NFC North only ranks behind the AFC North regarding running backs. Joe Mixon is a borderline elite running back and greatly impacted the Bengals´ Super Bowl run. Nick Chubb, the Cleveland Brown, is one of the elite backs and is among the best every year in most categories of the NFL Next Gen Stats, especially his rushing yards over expected annual rank near the top. His backup, Kareem Hunt, is also a dynamic player and would start for most teams. Najee Harris had a fantastic rookie year for the Steelers, while the Baltimore Raven, J.K. Dobbins, missed the year injured. He showed his potential in his rookie year in 2020.

A Vikings Upcoming Camp Battle Listed among NFL’s Most Fascinating