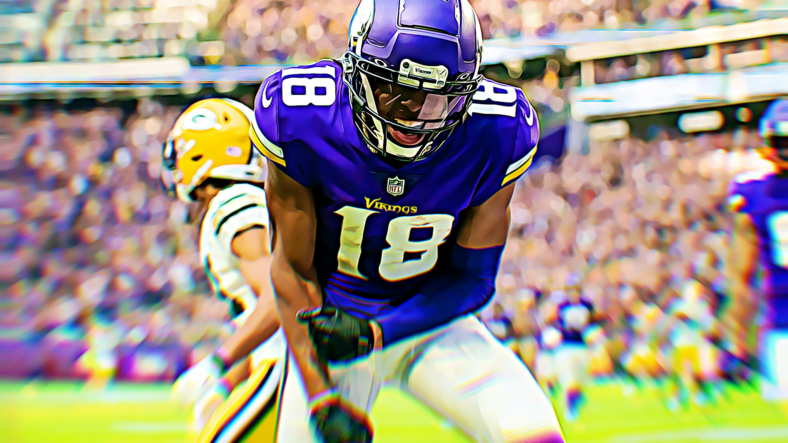 Although he claims to be “not fond of money,” Justin Jefferson-branded merchandise is now available at Lids stores nationwide.

Jefferson, 23, set the NFL record in 2020 and 2021 for most receiving yards by a player in the first two seasons of a career (3,016). He also ranks fifth all-time in receiving touchdowns in the same metric. The LSU alumnus arrived to the Vikings from the 2020 NFL Draft, direct compensation in the Stefon Diggs trade to the Buffalo Bills. Diggs soured on Minnesota’s offensive approach in 2019, voiced his disgruntlement on social media, and was ultimately traded to Buffalo for the draft picks leading to Jefferson, Camryn Bynum (S), Zach Davidson (TE), Janarius Robinson (EDGE), and Kenny Willekes (EDGE).

Here’s a look at one style of the hats from Lids.

An alternate style is less heavy on the Jefferson aspect, showcasing the Vikings logo with the “Griddy Hands” on the side.

Additionally, the Vikings rolled into training camp this week, the first without a Rick Spielman or Mike Zimmer attached to the product since 2005. And, of course, Jefferson was seen at the microphone sporting one of the caps.

Interestingly, Jefferson asked about his next contract, which will be on the docket for discussion during the 2023 offseason. Jefferson told Chris Tomasson from the Pioneer Press, “I’ll focus on contract after the season. Our main thing is reaching to that goal, but I’m not really too fond of money. I’m really just trying to get that goal of being the best receiver.”

Humility, evidently — or perhaps a lack of greed — is a Jefferson strong suit.

Jefferson’s career wavelength should increase in 2022 as Minnesota pivots away from the “run-first” offense approach preached since 2014. For eight years, the Vikings advocated defense foremost with Mike Zimmer in charge and preferred to run the football as the first option on offense. Now, however, the Kevin O’Connell-driven offense should focus on an aerial assault as the primary mode of attack, much like the Los Angeles Rams in 2021, where O’Connell was previously employed.

The Vikings take on the Green Bay Packers in Week 1 at U.S. Bank Stadium. Jefferson has a date with old pal, Jaire Alexander.

Healthcare Facilities in Hard-Hit Communities Less Likely to Give Vaccines

The Vikings Top Defensive Performers at Saints, per PFF

Explained: New Destinations of Former Vikings from the 2021 Roster