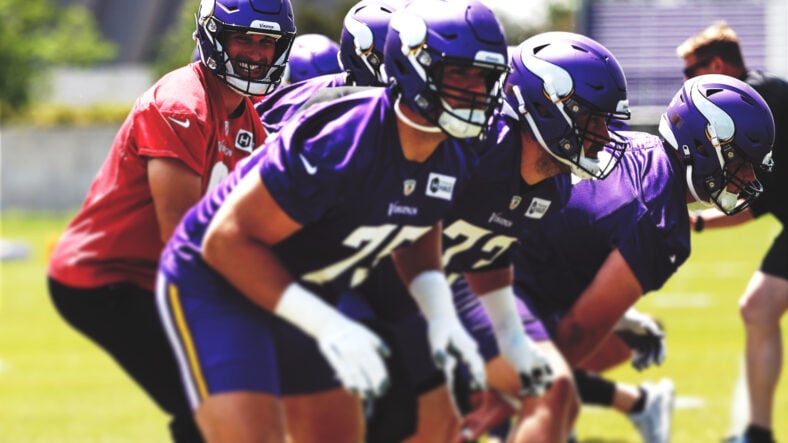 The Vikings’ offensive line was a big problem every year of the Mike Zimmer era. It started with Matt Kalil’s struggles and later with the infamous T.J. Clemmings. Once the Vikings fixed the left tackle spot by signing Riley Reiff, the interior became the issue. Dakota Dozier, Dru Samia, and Pat Elflein are probably still appearing in the nightmares of Vikings fans.

Last season, Oli Udoh’s penalties and Garrett Bradbury’s lack of strength ruined games for a purple team that missed the playoffs for the second consecutive year.

New general manager Kwesi Adofo-Mensah didn’t sign any big names during free agency. He brought in Chris Reed from the Colts and Jesse Davis from the Dolphins. Both can play the right guard spot. Davis seems to be the favorite to this point to win the job. In the draft, the organization added another guard to the competition when Ed Ingram heard his name called in the second round.

Ingram waited a full week of training camp for his chance to get first-team reps. Jesse Davis got all of them before, and when he missed a day of practice, with what the team called a “veteran’s day off,’ Chris Reed played with the first team. On Tuesday, however, Ingram got his chance.

The practice took place without pads. That would be the next step for Ingram to fully evaluate his performance. It’s still notable that he’s getting his chances to win the job. A big part might be that Davis and Reed are average guards at best. Average is an upgrade for Vikings’ standards, but Ingram, as a second-round pick, could have some higher upside. The former LSU guard is a powerful and explosive player. On Monday’s practice, he put on a clinic. Pancaking defensive tackles is always a big deal, and something Vikings fans rarely saw their linemen doing in recent years.

It will be interesting to see if he’ll continue to get snaps with the first team sometimes, even when Davis is back practicing. The next padded practice will take place on Wednesday.

Bradbury’s struggles are well documented. The Vikings drafted the center in the first round of the 2019 draft, but he couldn’t live up to his draft hype. Bradbury was supposed to fix the interior of the Vikings’ offensive line but failed so far. He’s one of the worst pass-blocking centers in the league. In 2021, the Vikings even benched him for Mason Cole for a few games. During Monday’s practice, he was the big headline after badly losing reps to Harrison Phillips.

Phillips is a powerful player, but a starting center shouldn’t look that bad in camp. Bradbury enters the final year of his contract. He has to show his worth in the upcoming season. His performances will determine his next contract.

The Vikings didn’t bring in any competition for him but might convert one of the guards to center. Chris Reed is apparently working on his center skills.

Reed can play all spots of the line’s interior, including the center position. He played very well for the Colts last season, mostly at guard. The three-way competition for the right guard could quickly become a two-way duel because Reed has to push Bradbury to play better.

Christian Darrisaw has a great camp so far, even if he’s going up against Za’Darius Smith and Danielle Hunter. The right tackle has shown flashes as a rookie and mostly played well. At times he had a bad rep mixed in. This year, however, he has a full offseason and preseason to prepare for the season.

He has the physical tools to become a dominant left tackle. Vikings fans will see what a fully healthy Darrisaw is capable of.

That might not be saying much, but the Vikings’ offensive line seems to be in a better spot than in recent years — a true camp battle of capable right guards. An offensive line, however, is only as good as their weakest link, so they have to fix the center spot as well. Bradbury’s struggles are concerning at the moment.

Is the excitement for the Vikings offense overshadowing concerns on defense?