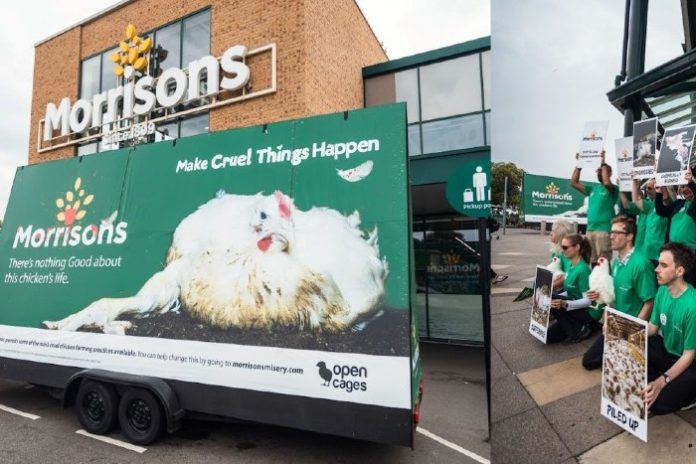 // Morrisons slammed by campaigners over its fast-growing “Frankenchickens”

Morrisons is facing criticism after protests were held by campaigners across five of its stores over its fast-growing “Frankenchickens”.

A survey showed that 97% of Morrisons’ customers agreed that the retailer should commit to ending the sale of “Frankenchickens” as images described as “horrendous” from the retailer’s chicken supplier farms were shown.

Our volunteers gathered this weekend in Bristol, Chippenham, Swindon, Reading, Brentford for an all day tour of Morrisons protests. 97% of customers we surveyed agreed with us that it’s time for Morrisons (who “cares deeply” for animal welfare) to stop selling Frankenchickens ✊ pic.twitter.com/Sp3gJmmqrw

An advertising truck accused the supermarket of deceiving the public with its “Make Good Things Happen” marketing campaign.

The protest tour is the latest escalation in the #MorrisonsMisery campaign which calls on the retailer to stop sourcing its chicken meat from genetically engineered Frankenchickens.

The birds are said to suffer from severe lameness, deformities and organ failure as a result of being bred to grow 400% faster than natural.

Just Eat Takeaway writes down value of Grubhub by €3bn

From Rugs to Riches: Tapi – how the Harris carpet dynasty rolls on