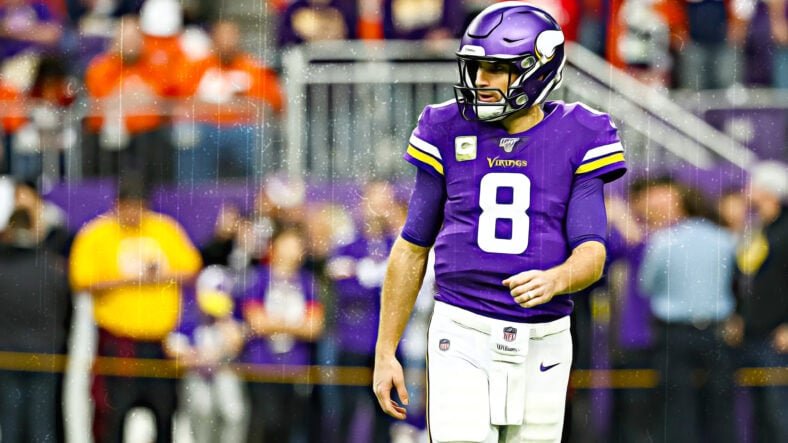 Adofo-Mensah told Epstein on the topic of inheriting the Vikings existing roster, “I’ll be frank. The one asset where you get nervous about not burning it down is quarterback.”

Indeed, the new Vikings boss didn’t burn down anything upon taking the job, instead keeping the roster mostly intact while adding about a dozen free agents and 10 rookies in the 2022 NFL Draft. Adofo-Mensah also extended Cousins for an extra year, gluing him to the depth chart through the end of the 2023 season.

Adofo-Mensah continued in the interview by saying the Vikings have “a good quarterback” but “don’t have Tom Brady or Patrick Mahomes.”

What does this mean? Well, Adofo-Mensah, foremost, told the truth. Nobody believes Cousins is in a quarterbacking tier with Brady and Mahomes. Brady is the best football player ever, owning seven Super Bowls to his name. Mahomes is the heir apparent to Brady, according to most folks’ judgment.

Still, faux controversy ensued, implying Adofo-Mensah “isn’t satisfied” with his quarterback or that Cousins may be on borrowed time. Here are the examples. First, from The Score:

The headline “Could the Vikings move on from Kirk Cousins in the near future?” is rich.

The PFT headline is fairer than The Score‘s, to be clear.

Adofo-Mensah’s musings are not a clue that he’s plotting a Cousins afterlife. He merely affirmed the obvious perk of employing Brady or Mahomes. Unsurprisingly, those players are not available to the Vikings, nor are unpolished Bradys and Mahomeses waiting to be discovered at the supermarket a la Kurt Warner 23 years ago.

The Miami Heat won championships a decade ago because the team added LeBron James in free agency. Had a non-Heat general manager said in 2011, “This whole basketball thing would be a lot easier if we had LeBron,” the quote would not travel the globe to incite discontentment.

But this is Kirk Cousins in the fold, so folks find it too irresistible to manufacture fake controversy. If Adofo-Mensah didn’t believe the Vikings could thrive with Cousins, he would’ve traded him in March when the passer did not have a no-trade clause in his contract. Instead, he re-upped with Cousins.

And in the tell-all Epstein interview, Adofo-Mensah was evidently too honest by explaining Cousins isn’t as good as Brady or Mahomes.

Later in the USA Today piece, Adofo-Mensah explained, “I believe in decision science and our abilities. I don’t believe that I can pick the next Pat Mahomes that much better than anybody. If you give me five chances, I think we’d be better and we’d get four out of five rather than three out of five. But one shot, your odds are at best 65%, so they study this.”

If he could’ve drafted “the next Mahomes” in April, he would’ve shipped Cousins to Carolina or somewhere similar. But per his estimation, there was no Mahomes-caliber talent in the 2022 draft pool.

Therefore, he decided Cousins was the best thing for the Vikings now.

What he didn’t do? Lament Cousins’ existence on his team — which is what some media outlets want to portray.

Here Is How Cardano-Based New Digital Economy Is Developing: Details

Explained: Why Baker Mayfield to Vikings Chatter Is a Little Weird

Another WR Gets Paid, and Justin Jefferson Salivates Somewhere.