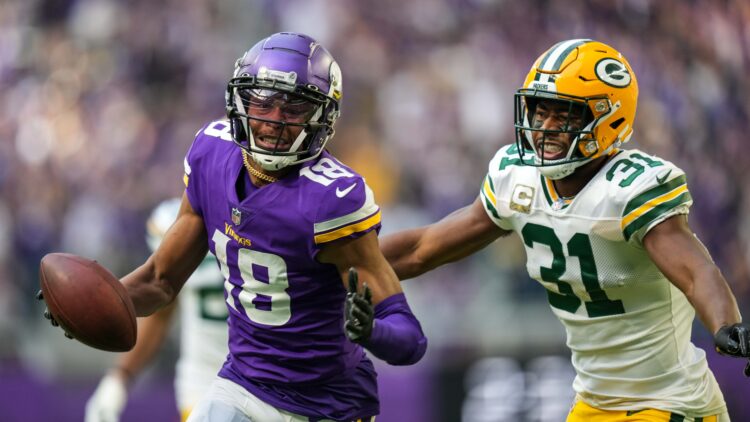 The Vikings will open their season on Sunday against the Packers in U.S. Bank Stadium. During Mike Zimmer’s tenure, the Vikings had a record against their division rivals of 7-8-1. Zimmer lost his first three matchups, but after his cold start, his teams were effective against the green foes.

That didn’t change when the Packers became juggernauts in the NFC and somehow won 13 games in three consecutive seasons. After losing both games in 2019, the Vikings split the series in each of the last two years.

Like in every game, some matchups are extremely interesting to watch and could decide the game’s outcome. They are not ranked in any particular order.

Justin Jefferson recorded eight catches for 169 yards and two touchdowns in last year’s matchup. In the second game, Kirk Cousins didn’t play, and he just recorded 58 yards. In the first one, however, the Packers had no shot at stopping ‘JJ’ despite knowing where the ball would go.

The Packers were without Jaire Alexander last season. Drafted in the first round in 2018, Alexander has been one of the elite cornerbacks in the NFL. In 2020, he was voted to the Pro Bowl and earned a second-team All-Pro nomination. He could be an option to be lined up against Jefferson all game long.

In addition to Alexander, the Packers have 2021 first-rounder Eric Stokes and last year’s breakout star Rasul Douglas. They can choose the combination that works best. Someone has to go up against Adam Thielen and K.J. Osborn. It will be fascinating to watch which CB defends which WR and how well they play.

All three had an injury-plagued campaign last year. Smith and Bakhtiari played one regular season game, while Hunter missed all of 2020 and ten games in 2021. However, when they are healthy, all three are potential All-Pro players.

Hunter and Smith form one of the best pass-rushing duos. Bakhtiari and his teammate Elgton Jenkins form one of the best offensive tackle duos. It’s unclear who of the two will play in the opening week, as both are still in the final stages of recovering from torn ACLs. It’s expected that Bakhtiari can play. Hunter and Smith are at full strength and looked great in training camp. All of the aforementioned star players face a tough and exciting matchup in Week 1.

While Rodgers and Cousins are generally not on the same level, whenever they play each other, both are phenomenal.

Cousins played eight times against the Packers and recorded 18 touchdowns and five interceptions. His passer rating is a ridiculous 110.4. His per-game average of passing yards is 281.

Rodgers, meanwhile, has the same 110.4 career average in 27 games against the Vikings. His 56 touchdown passes and just seven interceptions show his one-of-a-kind efficiency.

If none of the two defenses can stop the opposing passer, it could become another shootout, just like last year. The Vikings won 34-31, and the two QBs combined for over 700 passing yards, seven touchdown passes, and neither threw an interception.

In seven games against the Packers, Cook averages 108.4 scrimmage yards per game and 1.3 touchdowns. The Packers struggle to contain the dynamic Vikings runner, despite having some excellent players in the front-7. Kenny Clark is an annual problem for center Garrett Bradbury. Rashan Gary, the edge rusher, had a breakout campaign last season. At linebacker, former Golden Gopher De’Vondre Campbell played a fantastic 2021 and, therefore, received a massive extension.

The Packers also added two national champions, Quay Walker and Devonte Wyatt, in the first round. Walker will start next to Campbell, while Wyatt will start on the bench. In 2020, Cook scored four touchdowns and was the biggest reason for an upset win at Lambeau Field.

The Packers must stop something, either the passing game or the running game. However, the biggest strength of the Vikings is that they can hurt an opponent both ways.

Timing Could Be Perfect For A Vikings Winning Start

RIP to the Vikings Run-First Offense

Vikings Have the Most Organic Team in NFL