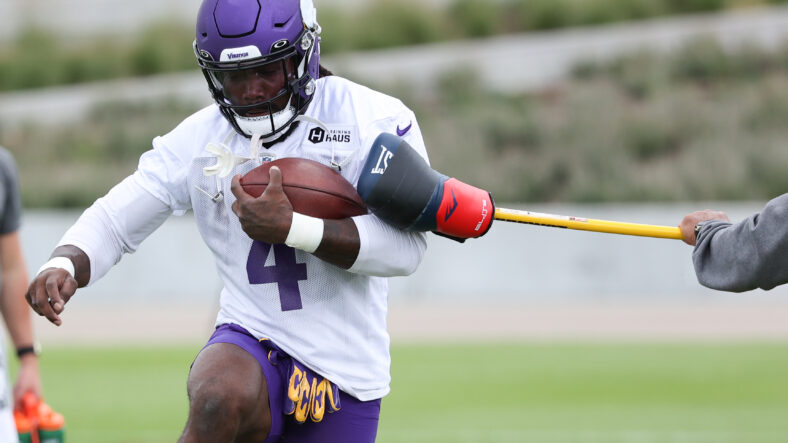 In recent years, the Vikings offense ran through the running game, namely Dalvin Cook. If the Vikings couldn’t run the ball, their offense simply didn’t work.

Under new head coach Kevin O’Connell, the Vikings offense should be more balanced and less reliant on Cook for a heavy workload and is responsible for making everything tick. That’s not to say Cook no longer has an important role. He absolutely does. I’m telling you now — look out for a Dalvin Cook career year.

Not being leaned on so much may equate to Cook doing something he has never done before — stay healthy for an entire season. He has put up some staggering numbers despite having never played more than 14 regular season games in a single season. A more balanced offense and maybe even more willingness from the current coaching staff to spread the workload may help Cook avoid breaking down this year. The Vikings have great depth at the running back position with Alexander Mattison, Kene Nwangwu, and Ty Chandler.

None of this means you should expect Cook’s production to drop. I believe it can have the opposite effect, particularly if O’Connell gets more out of him in the passing game — an area that Cook is underrated due to him not being utilized in that role as much as some other running backs are.

Back in 2019, Cook tallied 519 receiving yards from 63 targets. The past two seasons have reduced targets for Cook, 54 in 2020 and 49 in 2021. Cook can take the ball all the way from anywhere on the field if you get the ball to him in just a small about of space. It’s an area the Vikings should look to maximize.

Cook has registered well over 1,000 rushing yards in the last three seasons despite never playing more than 14 regular season games. Health is always a big question mark. Suppose he can stay on the field for all 17 regular season games. The numbers he is capable of producing are epic. His best season came in 2020 when he totaled 1918 yards from scrimmage. One thousand five hundred fifty-seven of those yards coming on the ground to go with 361 receiving yards.

I wouldn’t expect Cook to become only the ninth running back in NFL history to have a 2,000 rushing-yard season. However, if — and it’s a big if — he can stay healthy for the entire regular season, 2000 total yards from scrimmage is well within his capabilities. He doesn’t need 30 rushes a game to get it done, either. The Vikings have the depth at running back to let others pick up some of the load. Less can mean more for Cook this season, and my tagline for him will be “twenty is plenty.”

Any more than 20 rush attempts per game, and you’re getting into “flogging a dead horse” territory. There’s a reason running backs have lost value in the NFL. Teams prefer cheaper, younger options in a committee, as the likelihood of a workhorse, lead back breaking down is so high. The workload is simply too much.

Even the mammoth of a man that is Derrick Henry broke down last year.

For me, 20 rushes and five targets in the passing game is the optimal range for Cook’s involvement in this Vikings offense. You could even run the ball less with Cook, but let’s not forget what a phenomenal player he is — one of only three Vikings players who made it into this season’s NFL 100.

You still want the ball in his hands often. We have yet to see what a Kevin O’ Connell game plan looks like. The passing game will be front and center. However, don’t forget about Cook. He will still have a significant role to play, with less burden than in the past.

For that reason, I expect a Dalvin Cook career year in 2022.