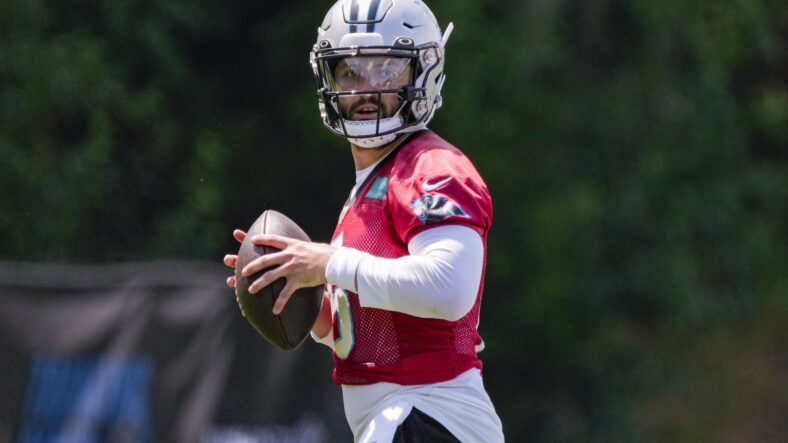 While current Minnesota Vikings QB1 Kirk Cousins is under contract for 2022 and 2023, ESPN has a contingency plan for the franchise — Baker Mayfield.

ESPN’s Dan Graziano forecasted potential starting quarterbacks for all teams in 2023 that could be switching personnel. The Vikings made the list.

“Cousins will turn 34 later this month, so he has some years left, but there’s a new front office and coaching staff in Minnesota, and they at least thought about switching up at quarterback this offseason before giving Cousins another extension,” Graziano wrote.

The article essentially predicts that Cousins will be back in 2023 — that’s what his contract states, and he has a no-trade clause — but it opened the door for Mayfield as an alternative option. Graziano continued, “I picked Mayfield because he was in Cleveland when Vikings GM Kwesi Adofo-Mensah was there. I have no idea if Adofo-Mensah likes him.”

Leaning into Mayfield for a theoretical Cousins replacement checks out, especially if the Vikings fail to reach the postseason in 2022. Minnesota has authored back-to-back losing seasons with Cousins at the helm, and if the subpar tendencies drag into 2022, it will mark the first time since 1961 to 1963 that the Vikings produced losing seasons thrice consecutively.

In that vein, patience with Cousins — from fans and perhaps the Vikings front office — would wear thin, and the purple cosmos might ponder trade scenarios. Of course, in the spring of 2023, any hypothetical trade of Cousins to elsewhere will need his approval.

Still, Mayfield taking over checks out, as Adofo-Mensah planned for the future, probably with a rookie passer from the 2023 NFL Draft. Again, this whole theory is dependent on the Vikings struggling in 2022 — something the current coaching staff and general management don’t foresee. Mayfield, after evidently floundering in Carolina, would hit the open market, Adofo-Mensah could sign him for cheap, and then the Vikings force him and a rookie passer into competition.

The other method — simply starting Mayfield following an underwhelming 2022 season in which the Panthers don’t want him back — is unlikely. Should the Vikings encounter life after Cousins, getting in bed with Mayfield as an “upgrade” would be silly.

Teams led by Mayfield are 29-30 in his young career before he sets foot on the field with the Panthers. Similarly, Cousins’ teams are 59-59-2 in Washington and Minnesota. The Vikings won’t acquire Mayfield to replace Cousins without a broader plan. The risk of inevitable and prolonged mediocrity would be too great.

But an addition of Mayfield, subtraction of Cousins in the annual quarterback offseason carousel, plus the drafting of a rookie passer does waiting in the wings isn’t crazy.

Perhaps the Vikings will make noise in the 2022 playoffs, and this can all be moot.

Summer Shorts: LLC Dissolution and Other Recent Decisions of Interest