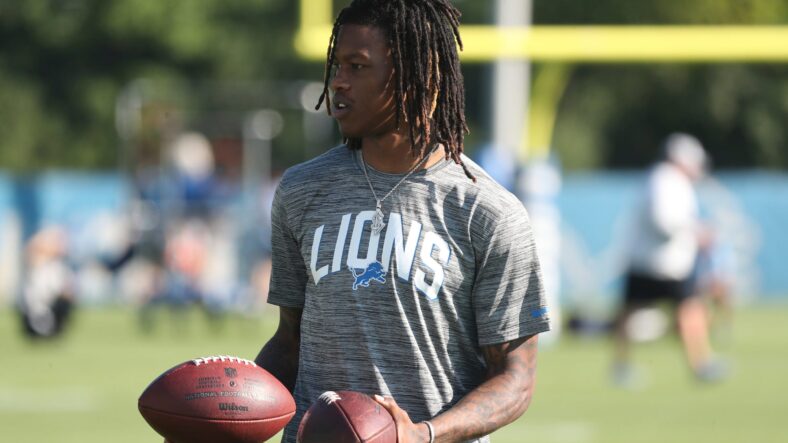 When Kwesi Adofo-Mensah was in charge of his first draft as Vikings GM, he made a controversial move. The Vikings traded back with the Detroit Lions. The first controversy was that it’s unusual to trade with a team from the own division. The next point of discussion was trading back 20 spots for insufficient capital.

Adofo-Mensah ended up selecting Lewis Cine with the 32nd overall pick. He’s flashing greatness but needs to develop in some aspects to reach his potential. The Lions, meanwhile, selected a standout college receiver with the original Vikings pick, Jameson Williams. His problem is a torn ACL, suffered in the college championship game against Georgia. The game also included the Vikings’ first-rounder, Lewis Cine.

The dynamic receiver has always been a longshot to be ready for the season opener but now will miss the first four games officially, as he was placed on the Reserve/NFI list.

His injury counts as a non-football injury because he suffered his injury before he entered the NFL. He’ll miss the first four games, including the Lions’ first trip to U.S. Bank Stadium in Week 3.

As soon as he’s healthy, he’s fully expected to be a big part of the Lions’ offense. Their top wideout is Amon-Ra St. Brown. He had a phenomenal rookie season, as he only trailed Ja’Marr Chase, DeVonta Smith, and Jaylen Waddle in receiving yards among rookie wideouts. Another highlight of his rookie campaign was the game-winning touchdown against the Vikings when Cameron Dantzler inexplicably covered the back of the endzone. It was the first of just three Lions wins in 2021.

Williams was the second selection of the Lions. The first one was Aidan Hutchinson. The Michigan native stays at home. Jacksonville selected Travon Walker with the first overall pick and left Hutchinson for the Lions.

The second matchup between the Lions and the Vikings will take place in Week 14, and the rookie Jameson Williams will probably be available at that point. Defensive end Romeo Okwara landed on the Reserve/PUP list and will miss the first meeting with the Vikings as well. He recorded ten sacks in 2020 but suffered a torn Achilles tendon last October.

Second-round edge rusher Josh Paschal landed on the same list. Curiously, he was the other selection with a pick that the Vikings gave up in the trade. The Lions’ rookie will also miss the first four games, including one against the Vikings. The Lions could get some excellent reinforcements back later in the season.

From 2018 to 2020, the Vikings beat the Lions in all six meetings. In 2021, however, the two NFC North rivals split the series. Overall, the Vikings lead the matchup with a record of 79-40-2. The Lions will attempt to regain relevancy after just winning 11 games combined in the last three seasons.

Anthony Barr’s Free Agency + the Cowboys Is a Head-Scratcher

Should the Vikings Pursue a Kicker Trade?

Who’s All on IR for the Vikings?