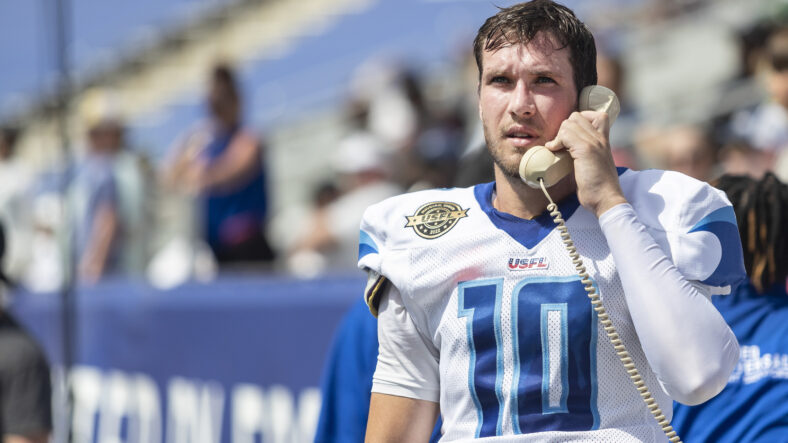 On Tuesday, the Jacksonville Jaguars released quarterback Kyle Sloter after the team welcomed E.J. Perry back to the roster. The day after that, the Minnesota Vikings released their first unofficial depth chart, nominating Kellen Mond and Sean Mannion as “co-QB2s.”

So naturally, on Thursday, Sloter publicly endorsed a return to the Vikings, a team he’s already played for in three separate seasons.

VikingsTerritory‘s Sean Borman tweeted a snippet of Kevin Seifert’s (who covers the Vikings for ESPN) comments on the Minneapolis radio network KFAN.

Interesting tidbit, right? That was just the beginning. Then, Rick Sosa, proprietor of The Purple Code, recommended Sloter’s addition to the Vikings roster in a tweet:

And that’s where the endorsement from Sloter arrived, as the 28-year-old tagged Vikings head coach Kevin O’Connell in the tweet-reply:

Sloter thrived in the USFL this spring and summer. He was named to the All-USFL team and guided the New Orleans Breakers to the semifinal round of the playoffs, losing one step before the championship to the Birmingham Stallions. Sloter was an MVP candidate for most of the season.

After the commendable USFL ride, the Jaguars signed the Northern Colorado alumnus, granting Sloter an opportunity to compete for the QB2 gig behind Trevor Lawrence. But he was cut 16 days later.

A preseason, folkloric hero, Vikings fans have an unusual affinity for Sloter. He’s auditioned for 26 NFL teams in his career, formally signing with seven — the Broncos, Vikings, Cardinals, Lions, Bears, Raiders, and now Jaguars. He had two stints in Minnesota, the first in 2017 and 2019, while returning briefly in 2021.

Undrafted five years ago, Sloter ended up with the neighboring Broncos in 2017. With Denver, Sloter was terrific in the preseason — that’s what he does — but was ultimately waived before the 2017 regular season. Thereafter, Sloter joined the Vikings, remaining on the roster for two years and returning briefly in 2021. As a preseason performer, Sloter owns a 12-touchdown to one interception split. His preseason theatrics keep Sloter at the forefront of Vikings fans’ brains at all times — evidently.

The broader implication from the initial Seifert comments — with or without Sloter in the conversation — is that the Vikings may not be wholly satisfied with the Mond-Mannion competition. Because, if they were content, why contemplate another backup QB?

The Vikings face a former Sloter team in a preseason game on Sunday, the Las Vegas Raiders. Mond and Mannion are expected to take the bulk of offensive snaps.

Sloter has never thrown a regular-season pass in the NFL.