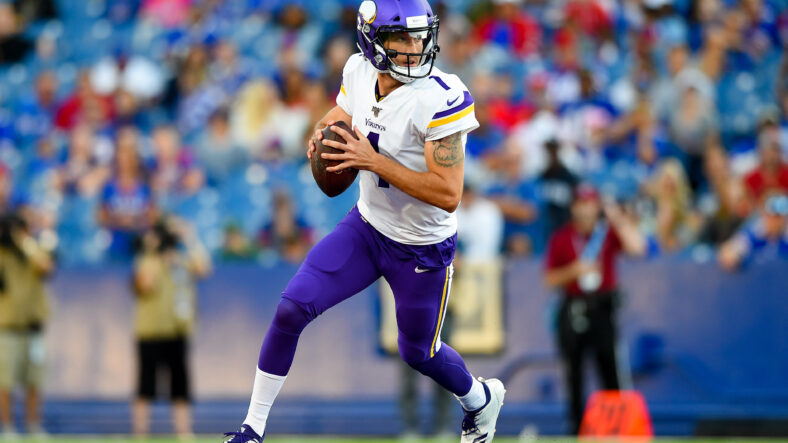 Once a Minnesota Vikings preseason darling, USFL standout quarterback Kyle Sloter is back in the NFL.

Sloter reportedly signed with the Jacksonville Jaguars on Sunday.

Jacksonville will mark Sloter’s seventh stop in the league, previously spending time with the Vikings, Denver Broncos, Arizona Cardinals, Detroit Lions, Chicago Bears. and Las Vegas Raiders. Even with six franchises in the NFL, Sloter has yet to attempt a regular season pass.

He was marvelous in the USFL, though. Sloter led the New Orleans Breakers in their inaugural season, making it all the way to the league’s semifinal showdown. He was also a part of the ‘All-USFL’ team, a prestigious honor from the young league.

The former Viking was a backup quarterback for Minnesota in three seasons (2017, 2018, 2021). Sloter routinely played like a celestial being in preseason games, leading an unusual amount of fans to call for his promotion on the depth chart. But that never happened.

In the USFL, he found a little glory and vindication with the Breakers. And that was enough to get a look from Doug Pederson and the Jaguars. Of course, the QB1 job is sewn up in Jacksonville, with second-year passer Trevor Lawrence not in any jeopardy of losing his job. But after Lawrence, Sloter will battle these men for the QB2 gig:

Sloter, 28, made Vikings headlines in June when he told the Pioneer Press‘ Chris Tomasson that he should’ve been given a fairer shake at a QB2 job last year in Minnesota, “Sean Mannion was two years my senior, and I was just a young guy so that’s a big gap in knowledge. Although I think my play was superior, I think they saw in Sean the ability to help Kirk in the classroom, and that was valued more.”

The new Jaguar was also in conversations for the USFL’s MVP award a couple of months ago. But a wide receiver named Kavontae Turpin took home the trophy.

The Jaguars open up the 2022 season on the road at the Washington Commanders.

When Does the Statute of Limitations Run After a Texas Appraisal?

How to Use the Latest Landscape Irrigation Techniques to Save Water

All the Vikings News: September 15