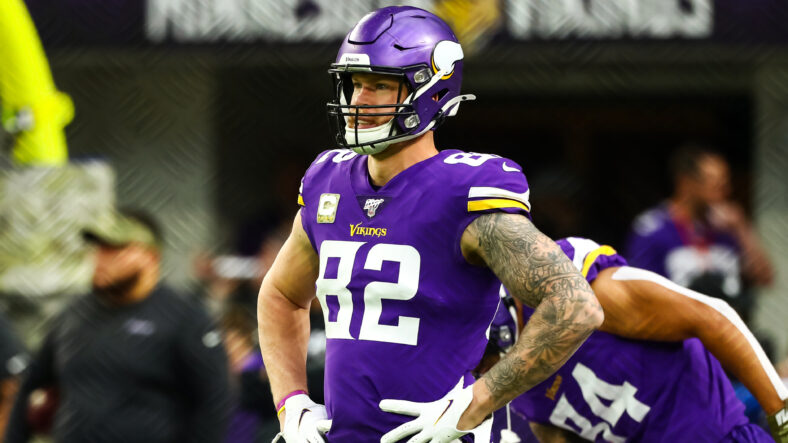 Former Minnesota Vikings tight end Kyle Rudolph will undertake his 12th NFL season alongside a quarterback in his 23rd season.

Rudolph chose the Tampa Bay Buccaneers as his free-agent destination this week, partnering with a team led by Tom Brady that won a Super Bowl in 2020.

The Buccaneers have a crowded house at tight end with training camp just days away, but Rudolph figures to nestle in the depth chart with a TE1 or TE2 job. These are Tampa Bay’s tight ends as of July 20th:

Rudolph, 32, played for the Vikings from 2011 to 2020, departing in free agency 16 months ago to join the New York Giants. In New York, Rudolph was underutilized, receiving just 39 targets in 2021 with an offense that would later undergo structural change. The Giants canned head coach Joe Judge in January, opting for the services of Brian Daboll, who was the offensive coordinator for the Buffalo Bills while Josh Allen rose to power. Daboll will apparently lean heavily on rookie TE Daniel Bellinger in 2022 instead of Rudolph.

Amid the last couple of months, Rudolph was the subject of Vikings fans’ desires, as the Notre Dame alumnus said on two occasions he was open to the idea of returning to Minnesota. The Vikings employ Irv Smith Jr. at tight end, but that’s about it for “big game” TE personalities. Rudolph would have provided the Vikings with instant depth, especially if Smith Jr., who missed all of 2021 due to a torn meniscus, encountered injury.

No cigar, though, as Rudolph will chase a Super Bowl ring in the Sunshine State. The Buccaneers are the frontrunner to represent the NFC in the Super Bowl seven months from now, holding +750 odds from prominent sportsbooks. If oddsmakers “get it right,” the Buccaneers will take on the Buffalo Bills in February’s Super Bowl.

As the Vikings passed on Rudolph’s free agency, the still team still has about $9 million in cap space, which could be used to sign Ndamukong Suh (DT), Eric Ebron (TE), or JC Tretter (C). It is unclear if new general manager Kwesi Adofo-Mensah will spend the free-agent cash, save it for a just-in-case injury slush fund, or roll over the money to the 2023 salary cap.

Tampa Bay’s acquisition of Rudolph lessens the blow of Rob Gronkowski’s recent retirement. The future Hall of Famer and pal of Brady walked away from the sport in June, but some believe the retirement will be short-lived. Gronkowski mentioned he would return if Brady summoned him.

The terms of his new contract were not immediately available.

Look for the Right Health Solutions with the Regenerative Medicines

The FTC Seemingly Thumbs Its Nose at The Supreme Court

How the Vikings Handled the Commanders Key Players

Per PFF, the Vikings Top 2022 Players from Best to Worst: After Week 3

The Vikings 2022 Offense by the Numbers: After Week 4