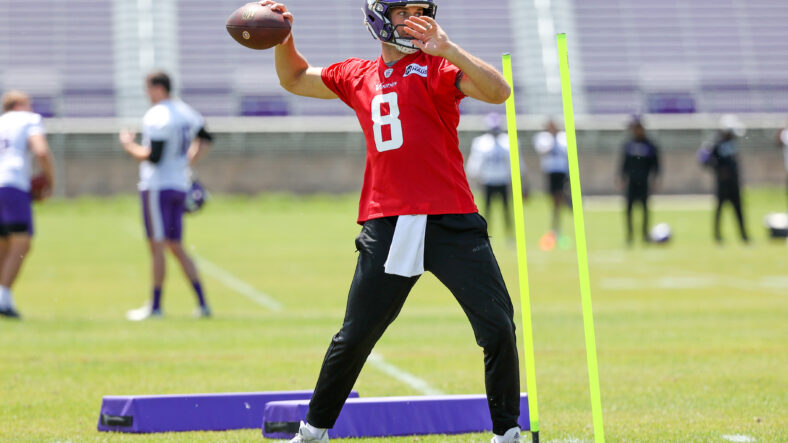 Kirk Daniel Cousins has always been an afterthought, an underappreciated overachiever who doesn’t get the respect he deserves.

Out of high school, he was the 137th-ranked QB in his class. He signed with Michigan State, one of only two Power Five schools that offered him [1]. Once he earned the starting nod as a redshirt sophomore, he was still the fourth most talked about QB in his own conference [2] [3]. After breaking MSU school records in virtually every passing statistic, he was the second quarterback taken by the Washington then-Redskins in the 2012 NFL Draft. Even after proving himself to Washington as a legitimate franchise quarterback, Washington franchise-tagged him. Twice.

He’s always been just “alright.” Not good enough in big games. Not quite ‘cool’ enough. Sorta dorky. A preacher’s son. He doesn’t swear (he’s known for muttering ‘frick’ and ‘dang’ after making a bad play). He doesn’t have Mahomes’ flare, Rodgers’ hair, Brees’ magnetism, or Jackson’s passion. He drives a big white van and is proud of it. But Kirk Cousins can spin it, and it’s a shame that most don’t acknowledge it.

So it’s no wonder that when contract time comes around for Kirk, he doesn’t shy away from signing big checks. He’s made it clear he wants to stay in Minnesota for the rest of his playing days. His restructured deal is proof of that: rather than maximizing annual earnings with a $45m check for the 2022 season (the last remaining year of his contract), he reworked his deal to add an additional year; more money overall, less annually [4]. He got a little too: the new money is fully guaranteed, and his contract has a no-trade clause. That white van isn’t the only thing Captain Kirk is driving.

Kirk wants his respect. I can’t speak for women, but as a man, respect means more than the money at the end of the day. Sure, some extra Washingtons is never a bad thing, but the reason why we ask for raises isn’t just because we just want a cushier 401k: we want the respect that is communicated through that pay raise. For professional athletes, even derpy Kirk Cousins, there is an alpha quality that drives them, so we shouldn’t be surprised when he wants good money. He has repeatedly shown that he can sling the ball, and he wants it to be known.

Remember that home Lions game in October? Captain conservative Zimmer ran the ball on 3rd-and-7 deep in his own territory (preceded by runs by Alexander Mattison and CJ Ham; yes, CJ Ham) rather than trusting his QB to ice the game. Alexander Mattison fumbled, which led to a Lions go-ahead score with 0:37 left, almost certainly sealing the Vikings’ pathetic fate that fall day. That’s when angry Kirk came out to play (I’ve always believed the best Kirk is angry Kirk). Two seeds to Adam Thielen later, Cousins had put Greg Joseph in position to win the game with a 54-yard field goal [5]. After the ball sailed through the US Bank stadium uprights, Zimmer and Cousins were spotted celebrating (?) on the sidelines.

There was a playful (?) shove from number 8 to Zimmer that Twitter dissected for the rest of the week. Yeah, that wasn’t a playful shove, despite what the unassuming Michigander may have said. Kirk was pissed. His coach didn’t trust him to get it done the series prior, and it had almost cost them the game — and then the quarterback had to bail his coach out with those two masterful throws just minutes later.

Is he elite? No, and let’s not pretend anyone said otherwise. Does he make mistakes and have flaws? Yes. But it’s undeniable that he is one of the best in the world at throwing a football, and it’s about time he gets that recognition. He’s not even supposed to fricking be here. The man just wants his dang respect.

Will is a husband, father of two, and a lifelong Minnesotan. He earned an undergraduate degree in Economics (just like Kwesi Adofo-Mensah). Will’s favorite pastimes are water skiing, Minnesota sports, and Cinnamon Toast Crunch. Follow him on Twitter (@willbadlose) and find his other sports content at Twins Daily and his very own Bad Loser Blog.

The Vikings Are the Worst 8-2 Team in NFL History, by the Numbers.

Explained: The Major Summer Takeaways for the 2022 Vikings