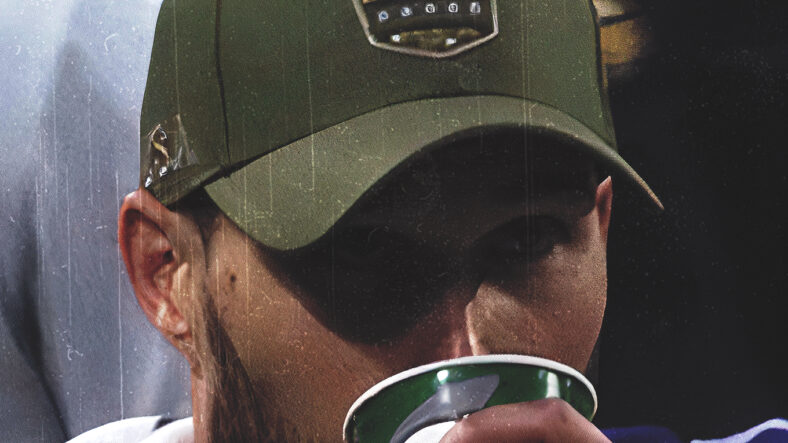 Minnesota Vikings quarterback Kirk Cousins returned to training camp on Wednesday after a five-day absence due to COVID. And he’s evidently a new, edgy man.

Cousins has built a reputation of kindness and don’t-rock-the-boat, stacked upon a “dad persona.”

Well, the 34-year-old tweaked that stature at a joint practice with the San Francisco 49ers, a team facing the Vikings this weekend in preseason game #2. Not known for on-the-field theatrics, Cousins let his hair down with a new coaching staff, adding an expletive to his signature catchphrase, “You like that?”

And according to Ben Goeslling from the Star Tribune, the Eagan crowd reacted with “a mix of surprise and excitement.”

Cousins has a lot at stake in 2022, attempting to shed a career-long perception of mediocrity. Fans and pundits fixate on his “quarterback record” of 59-59-2 (.500), a strange criticism for a single player in a 53-man team sport. Plus, the Vikings have missed the postseason in back-to-back seasons, causing Cousins to foot the blame despite his 68 touchdowns to 20 interceptions.

The 68 passing touchdowns rank sixth in the NFL since 2020, while the touchdown-interception ratio (6.3) is the third-best leaguewide behind Aaron Rodgers and Russell Wilson.

Still, as the offense’s leader, Cousins is skewered for not “doing more” to circumvent a suspect defense in the least two years and a routinely bad offensive line. In fact, when the Vikings cleaned house at general manager and head coach in January, many Vikings fans believed a new boss would trade Cousins for a fresh start.

But the Vikings new general manager, Kwesi Adofo-Mensah, did the opposite, extending Cousins’ contract, adding more guaranteed money, and slapping a no-trade clause onto the deal.

Now, edgy-Cousins must prove with a friendly, handpicked coaching staff led by Kevin O’Connell — Cousins and O’Connell were coworkers for a year with the Washington Commanders — he can drag the Vikings to the postseason. Another season in the ballpark of eight wins and nine losses would almost certainly dampen all existing enthusiasm for Cousins and create an additional season of offseason trade rumors.

Fortunately for Cousins, he has the support of the new front office and coaching staff. O’Connell and his pals “unlocked” Matthew Stafford in Year One with Los Angeles, so the working theory is that O’Connell can replicate the success with Cousins.

If profanities surface along the way, well, great.

Vikings QB Is an All-Time Great – In One Statistic

Where the Vikings Spend Money, by Position