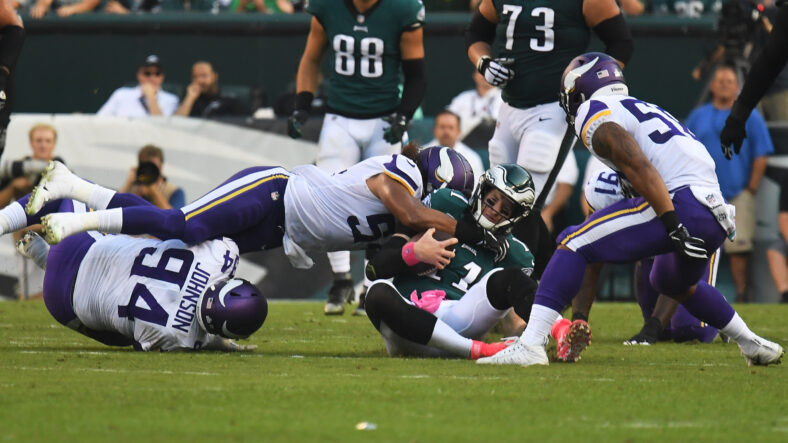 The Vikings head to Philly to face the Eagles and their fans, who will likely be more obnoxious than usual with the Monday night game. Both teams come off impressive opening wins — the Vikings convincingly over arch-rival Green Bay and the Eagles, who built a 17-point lead and then held on for a 38-35 victory in Detroit.

“It’s a huge week for us, a big opportunity to go to a really tough environment, our first test going on the road,” Coach Kevin O’Connell said. “It’s truly one of those places where you can tell your team it’s our team against 70,000 plus. They’re going to have it rocking, first Monday night game and coming off a win, a playoff team last year. They’re a tough outfit in all three phases.

“I’m thinking of two things—can we handle the success of last week going on the road for the first time and can we improve so we’re at our best when it’s required?.”

Here are my keys to the Vikings beating the Eagles:

1. Keep the offensive mix, but good week to run it well: The Vikings ran effectively and stuck with it against a tough Packers defense, with Dalvin Cook and Alexander Mattison combining for 126 yards. The Eagles struggled in run defense last Sunday, with D’Andre Swift rushing for 144 yards and Jamaal Williams adding 28 yards.

The offensive line will face a good front four led by six-time Pro Bowl defensive tackle Fletcher Cox who will challenge Ed Ingram and Garrett Bradbury after they had their hands full with Kenny Clark last week. Ingram did well in run blocking in Week 1 while struggling some in pass protection, but he should continue to improve. Brandon Graham is a solid vet at defensive end, but the other starting defensive end– Derek Barnett—was lost for the year with an ACL.

2. K.O. keeps scheming J.J. open while hitting other targets: After a monster game against the Pack, Justin Jefferson is likely to attract more attention, including a very good corner in Darius Slay with possible safety help. O’Connell was masterful in lining up Jefferson all over (including in the backfield), which will continue. I look for more targets for Adam Thielen, K.J. Osborn, and Irv Smith Jr. in Philly, but Jefferson still must get double-digit targets against all teams. But if the running game is working, stick with it to control time of possession.

3. Kirk Cousins and that prime time thing: His record in prime time has been overplayed the last couple of years, and he did win two of three night games last season-at home against Pittsburgh and at Chicago. Cousins looks confident and poised running the new offense. He and O’Connell were very much in sync last week. Now, Cousins has to perform well in a loud, hostile environment against a defense with talent, but they just gave up 35 points to the Lions, so they’re definitely beatable.

4. Win the turnover battle and limit the penalties once again: These two factors were crucial for the Packer win, going plus 2 in turnovers (plus a 4th-and-Goal stop that, in effect, was a turnover) and playing a disciplined game with only three penalties for 20 yards. The offense must avoid false starts with the crowd noise.

5. Control Jalen Hurts’ running and passing: The Eagles QB is underrated and developing into a fine NFL quarterback. He threw for 243 yards and ran for 90 yards and a TD last week. O’Connell said of Hurts: “He has the skillset to impact the game on the ground but I don’t think he gets enough credit for what he’s able to do throwing it. He is a major part of their run game with his physicality.” The Vikings D is better than Detroit’s, and the two inside backers — Eric Kendricks and Jordan Hicks — will be vital in stopping Hurts on his designed runs and his scrambles under pressure.

6. Also control the Eagles other two offensive stars, A.J. Brown and Miles Sanders: Brown is a big, strong target who had the second-best receiving game in Week 1 behind Jefferson with 10 catches for 155 yards. He was a great trade acquisition and should receive double coverage by the Vikings secondary. I especially don’t like the thought of Cam Dantzler trying to cover him, so perhaps Patrick Peterson should follow him with safety help. Sanders is a great dual-threat back who rushed for 96 yards with a 7.4-yard average against Detroit. Harrison Phillips and Dalvin Tomlinson must lead the run D.

Tight end Dallas Goedert is a threat, as is last year’s No. 1 pick DeVonta Smith at wide receiver. Smith had 916 receiving yards and 5 TDs last season, but he was shut out last week so look for Hurts to get him involved early. The Eagles are a much bigger test for the Vikings secondary than what the Packers brought to Minnesota.

7. Danielle and Z wreak havoc: This is a key every week—keep Danielle Hunter and Za’Darius Smith healthy and pressuring the quarterback as they did with a sack apiece and lots of pressure on Rodgers. But again, when they get close to Hurts, they need to bring him down or disrupt his escape from the pocket and control his bootlegs, so the linebackers have a chance to tackle him.

8. Win the special teams battle, and Reagor makes a big punt return: This is Jalen Reagor’s return to Philly, where he is considered a bust as the 2020 first-round pick just ahead of Jefferson. Perhaps Reagor will get a chance in the passing game, but his impact is more likely as a punt returner, and we know he’d love to bust a big return against his old team.

Greg Joseph is kicking so well (56-yarder last week as he went 3 for 3 on field goals). He needs to keep his hot streak going in a tough place to play.

Jeff’s Prediction: I see an exciting, wide-open game with lots of big plays by both offenses. I think the Vikings will go into Philly with a lot of confidence after knocking off the Packers, and I see a big night for Dalvin Cook setting the table for success in the passing game for Cousins, Jefferson, and a trip to the end zone for Thielen.

On defense, I think Hunter and Za’Darius Smith will be active, lining up in different spots and successfully disrupting Hurts’ timing downfield with Brown, Goedert, and DeVonta Smith and hurrying Hurts into an interception or two. Brown will still get his 100 receiving yards, and Goedert will be a factor, as will Sanders, but I think the Vikings win a high-scoring game on a late Joseph field goal and get off to a terrific 2-0 start.

Best Other Games in Week 2:

Dolphins at Ravens: Lamar Jackson has shut down negotiations on his extension after reportedly turning down an offer to make him the highest-paid QB on average. I don’t think it’s a wise move on his part with the injury risk for a running QB like him, but he’s betting on himself to have a great year, and he played well in an easy Week 1 win over the Jets. Miami’s D will be a tougher unit, but Jackson will make enough big plays to beat the Dolphins, who will have trouble scoring in Baltimore against a solid D.

Tampa Bay at New Orleans: The Saints amazingly have beaten Tom Brady and the Bucs in all four meetings since Brady’s arrival. Saints Head Coach Dennis Allen was the defensive coordinator in those wins, and I think he continues his mastery of Brady, who has a beat-up offensive line going against a potent Saints pass rush. Receiver Michael Thomas is back and playing well as a prime target for Jameis Winston (two TD receptions in last week’s comeback win over the Falcons). I like the Saints at home.

Cincinnati at Dallas: The Cowboys are reeling after a dismal performance in their opening loss to the Bucs, in which they lost QB Dak Prescott for at least three weeks with a hand injury. Cooper Rush gets the start, but his receiving corps is suspect other than CeeDee Lamb, and Ezekiel Elliott is not the prolific back he once was. I see a bounce-back game for the Bengals with Joe Burrow not turning it over as he did last week (five times in the loss to the Steelers). Give me the Bengals.

Chicago at Green Bay: Easy pick with Aaron Rodgers and the Packers defense bouncing back in a big home win over the Bears, who had their upset last week in the rain over the 49ers but won’t pull it off two weeks in a row.

Tennessee at Buffalo: In the early Monday nighter before Vikings-Eagles, who can go against the Bills after watching Josh Allen and Company clobber the Super Bowl champion Rams in L.A.? And the Titans blew their home opener against the gutsy Giants. Buffalo’s defense looks improved to go with a great offense. They’ll beat the Titans by double digits.

Ethereum Might See Further 31% Drop in This Event: Details

The Insurance-Only LLC – A Consideration for Buy-Sell Agreements

5 Winners of the Vikings Game vs. Raiders

The Commanders Key Players vs. Vikings