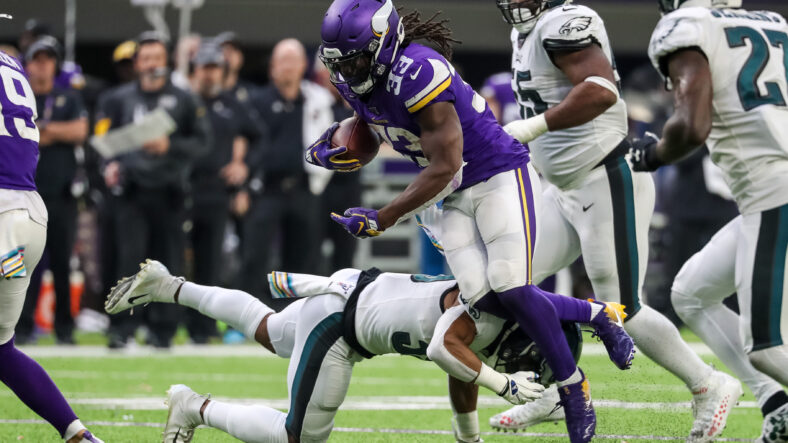 Vikings fans are running on clouds after that opening win against the Packers. How could you not be? A dominating win against a divisional rival is always a reason to celebrate. However, I am not 100% sold on this team.

The Vikings played against a Packers team that was missing its number 1 wide receiver and both starting tackles. They also deployed an offense in a brand new scheme the Packers hadn’t seen yet. There are serious questions that need to be answered, like how can the defensive line play against a good offensive line?

While we feel good about our Vikings team, we need them to replicate their performance in week 2. It is unclear if they will be able to sustain this success. However, there are several keys that they can deploy on Monday night to beat the Eagles.

How the Vikings Offense Needs to Attack

Luckily for the Vikings, they had such a dominant performance from Justin Jefferson that they didn’t have to deploy a large portion of their playbook. They hardly showed anything other than their most basic concepts. This should give them an edge against the Eagles.

However, the Eagles’ defense, while it did get torched by the Lions, looks to be really good. Their defensive line still has Fletcher Cox and the freak of nature rookie Jordan Davis. Additionally, their cornerbacks, James Bradbery and Darius Slay, are very good.

All that said, the Lions could take advantage when Jordan Davis was off the field. They ran for more than 7 yards per carry while he was not on the field and around 3 yards while he was on. That gives the Vikings a blueprint for victory.

Essentially, the idea here should be to spread out the defense with 3- or 4-wide receiver sets. This should force the Eagles into their smaller package and get Davis off the field. Then they can run right up the middle with Dalvin Cook.

This will likely lead to shot plays down the field off of play-action. If KOC can scheme Jefferson to be covered by linebackers as he did against the Packers, look for Jefferson to have another huge day. Although that is possible, expect this to be the Dalvin Cook show.

The Defense Must Contain Jalen Hurts

The real struggle for the Vikings won’t be the offense. It will be about playing good defense against a mobile quarterback who can throw the ball to 2 excellent wide receivers in AJ Brown and DaVonta Smith. Couple that with a good offensive line and a rushing attack led by Miles Sanders, and you are looking at a very difficult matchup.

The Vikings gave up 6.2 yards per carry against the Packers. This was a sacrifice they were willing to make to prevent the big pass plays. Although, this week, that will be a recipe for disaster. The Eagles will have no problem running it 40 times between Sanders and Hurts.

How do the Vikings stop this?

Look for them to deploy a lot of 3 safety looks with Lewis Cine being healthy. This will allow Harrison Smith and Cine to get involved in the running game. Combine this with an emphasis on the defensive front to be disciplined in their rush lanes, and the Vikings have a shot at stopping this offense.

The key with the 3-safety look is that they can drop Smith into the box and keep a very range-y Cine on the back end to prevent the deep shots to DaVonta Smith and AJ Brown. This is easier said than done. However, if they can force Hurts to move off his first read and keep him in the pocket, they will shut down the Eagles’ offense.

However, this might prove to be too much for the Vikings. It is almost impossible to contain a mobile QB, slow down a potent run game, and prevent the deep shots. This is why I have the Eagles winning this game 23-21.

Retail closes for the day as nation says farewell to Queen

Explained: The Good and Bad from the Vikings 1st Preseason Game