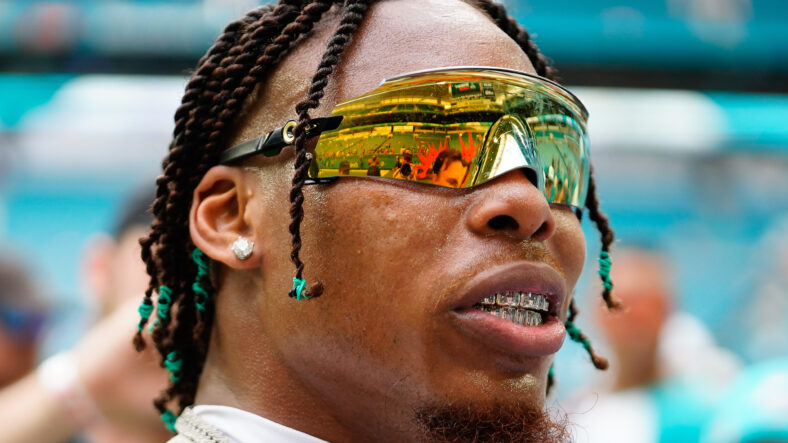 As of November 13, 2022, Justin Jefferson has made his case as the best wide receiver in the NFL. The only reason that’s likely to be topped is that he’ll have an opportunity to prove it again on Sunday against the Dallas Cowboys.

Coming into the road game against Buffalo, Justin Jefferson was second in the NFL for receiving yards. He trailed only the Miami Dolphins Tyreek Hill and led the Bills Stefon Diggs by ten yards. Although they were never teammates, Diggs was dealt to Buffalo, allowing Minnesota to select Jefferson in the NFL draft. There was unquestionably a desire for the younger star to shine brighter than his predecessor.

It didn’t take long for Jefferson to establish himself against the Bills. Jefferson fired the game’s opening salvo when he scored on a 22-yard reception from Kirk Cousins. Early in this one, the Vikings pass catcher was in sync with his quarterback and immediately began racking up yardage. There was a mid-game lull, but Jefferson was there when needed the most.

Obviously, the most critical contribution he made was hauling in the 32-yard reception to convert on 4th and 18. Going up against the Bills defender, Jefferson lept, stretched out his arm, had some sort of out-of-body experience, and came down with a one-handed grab that will be forever cemented in the memories of Vikings fans. That catch was one of the craziest things we’ve ever seen in NFL action.

Ultimately, Minnesota went on to win the contest, but it was again Jefferson who had put the league on notice. Cousins threw a whopping 50 times on Sunday, of which 16 targets were directed toward the former LSU standout. Jefferson hauled in 10 of them for a ridiculous 193 yards. His 1,060 receiving yards trail Miami’s Hill by less than 100, and he’s done so on 12 fewer receptions.

As a whole, Jefferson’s numbers this season look otherworldly. What’s crazier is that it remains true despite back-to-back stinkers early this season. O’Connell recognized that he must find ways to have his top playmaker involved no matter what looks the defense is throwing at them. While the Vikings benefit from an additional game for the second time in league history, there’s no denying Jefferson will be locked in on making plenty of records fall.

Coming into the season, it could probably have been argued that Davante Adams was the most complete receiver in the game. Regardless of what a mess Josh McDaniels and the Raiders are, I don’t think that same statement can be made in a world where Justin Jefferson exists.