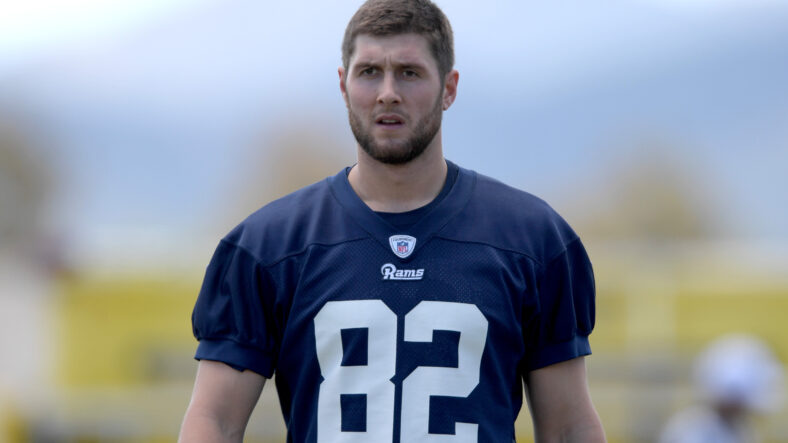 All offseason, the talk was of Minnesota Vikings tight end Irv Smith Jr. making his return to the football field. Unfortunately, he again suffered an injury during the preseason, and while he did play in Week 1, it was the former Oregon Ducks tight end Johnny Mundt that made the bigger splash.

On Sunday, the Minnesota Vikings deviated from a traditional gameplan under former head coach Mike Zimmer. Instead of slamming Dalvin Cook up the middle on first down, Kirk Cousins dropped back to pass. It wasn’t Justin Jefferson, Adam Thielen, or any of the expected offensive weapons to catch that first pass, though. Johnny Mundt, a tight end Kevin O’Connell has familiarity with due to their time together in Los Angeles, caught a 12-yard pass to kick things off.

That was Mundt’s longest reception of the day, as he accumulated another five yards on two separate catches. Targeted three times in the 23-7 victory, the former Rams tight end hauled in each of them and drew more targets than the aforementioned Irv Smith Jr.

With three targets and three receptions, Mundt tied career highs for both categories. Across four seasons with the Los Angeles Rams, Mundt tallied just 10 total receptions for 93 yards. He was often blocked behind other talented weapons in that offense, and while the same could be true in Minnesota, it appears that O’Connell is at least amenable to getting him into the action.

When the dust settles on the season, it should be expected that Smith Jr. leads Vikings tight ends in receiving. That said, it doesn’t appear as though this is a situation involving a starter and backup as much as it is a 1A and 1B option. Both Mundt and Smith Jr. should find themselves on the field plenty in this scheme, and they’ll both be trusted security blankets behind Jefferson and Thielen.

Mundt was never a star at Oregon, but he absolutely contributed. During his senior season in 2016, the former Duck hauled in four touchdowns on 23 receptions. He was often looked at by superstar teammate Justin Herbert, and he more than held his own as an offensive weapon.

That same type of output should seem possible for the Vikings. No, he won’t ever emerge more valuable than Jefferson or Thielen, and maybe he’ll fall behind Smith Jr., but for now, Mundt is making his presence known.

Explained: The 7 Big Takeaways from Vikings Win in Miami