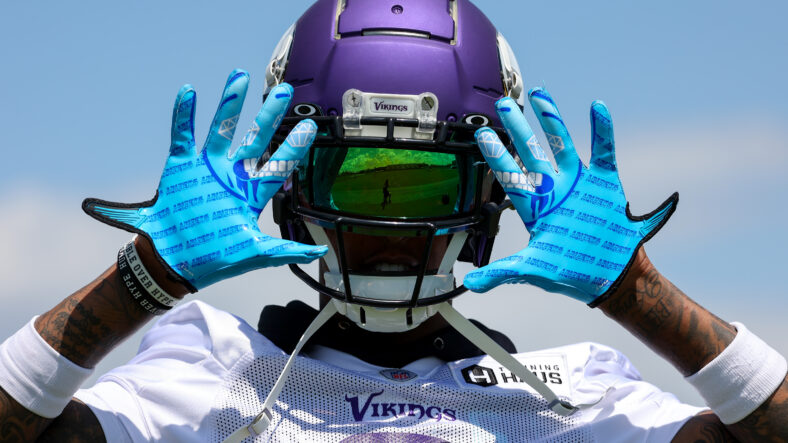 O’Connell and his coaching staff now get to see all players for the first time for an extended period when the players arrive for training camp. Most players report on Tuesday, July 26th. However, rookies and some veterans will get a two-day head start when they come to work on Sunday.

The first game action for the new faces wearing the purple jersey in the upcoming season will take place on August 14th in Las Vegas against Derek Carr’s Raiders. After two more exhibitions, the team has to be ready for the first real battle on September 11th when Aaron Rodgers and his Packers come to town.

These are my predictions for the upcoming Vikings training camp::

1. Positive Mood Is Here to Stay

A big part of recent Vikings’ failures was the negative mindset in the building. Zimmer looked more grumpy every week. Reports about various feuds surfaced. Players requested a new culture for the future of the organization. Their wishes were heard, as O’Connell and Adofo-Mensah, the new men in charge, seem always to be smiling. They are both charismatic, young, and dynamic leaders. The whole theme of the upcoming camp will be the new, positive culture. There are always setbacks in the weeks of training camp. There might be a bad practice or an injury. But this year, positivity will overshadow everything, and hopefully, players will be ready for it. Athletes generally perform at a higher level if they feel more comfortable.

2. Dantzler Runs Away with Starting Job

The Vikings had to upgrade their cornerback group. Adofo-Mensah did just that. He re-signed Patrick Peterson and drafted Andrew Booth and Akayleb Evans. However, one Vikings starting cornerback was always on the roster. Cameron Dantzler was a 2020 third-round pick and had to start immediately after the departure of Xavier Rhodes, Trae Waynes, and Mackensie Alexander. Dantzler played well most of the time in the last two seasons, despite Zimmer’s criticism. Dantzler escaping Zimmer’s doghouse will give him more confidence and lead to much better play. He has shown the talent to be a shutdown cornerback at times, and a big year could be in line for the cornerback, but first, he has to earn the starting job, which he will secure in camp.

First-round draft pick Lewis Cine will win the starting spot over Camry Bynum. And not only that, but he will also look like a future superstar early in his time in Minnesota. The national champion has elite speed, is an aggressive hard hitter, and processes plays quickly. He will learn the Xs and Os of safety play from Harrison Smith. However, fans of the purple team will see why the front office and coaching had big smiles on their faces when the Vikings landed the former Georgia Bulldog. Bynum will still get snaps on defense, just not as a starter. He’ll play in sub-packages that allow the Vikings to play with three safeties.

This is not an optimistic prediction. But it will most likely happen, so be prepared for it. It’s rare for all 90 players on the roster to make it through camp without someone suffering a major injury. Last year, wideouts Olabisi Johnson and Blake Proehl and tight end Irv Smith injured their knees before the season started and missed the whole campaign. A neck injury in 2020 had Danielle Hunter sitting out the season. Unfortunately, injuries are part of the game, and the best teams react best to those unfortunate events. Every injury gives someone else a chance to step up, like Tyler Conklin last year. He made the best of the situation, replaced Smith, played a big role, and signed a big contract with the Jets in the offseason.

Fans had high hopes for the former Texas A&M quarterback. In 2021, the third-round pick was buried on the depth chart behind Cousins and his backup, Sean Mannion. Zimmer didn’t like the pick and didn’t seem to like rookies in the first place. After Mond caught Covid, he never received a fair chance. This will be different after the regime change. He might not be better at reading a defense than Mannion but is much more talented. A strong arm with solid accuracy and mobility makes him an interesting project. The Vikings need to see what they got in him before they decide if they should draft a quarterback next year. He will be Cousins´ backup in the upcoming season and therefore beat out Mannion.

6. RG Is Not a Weakness Anymore

Cousins’ protection was a disaster in the first four seasons of his tenure in Minnesota. The Vikings signed Jesse Davis and Chris Reed in free agency. Both have starting experience in the NFL and should be an upgrade over most interior linemen in recent Vikings history. They also added Ed Ingram in the draft. Whenever a guard gets drafted in the second round, he is supposed to start sooner rather than later. There will be an open camp competition for the right guard, and whoever wins it has to beat out two good options first. Davis got most first-team reps in OTAs, but it’s hard to say how big of a deal that is, especially because Reed played some center. The most likely scenario is that one of the veterans starts, and Ingram takes over midseason, but he shouldn’t be counted out for Week 1, either.

The tight end is named ‘breakout player’ every year. Up to this point, it never materialized. First because of a timeshare with Kyle Rudolph, and last season because of a knee injury. However, this is the year in which it will finally happen. He provides speed and receiving skills to the offense and can be a real threat, a big difference from the recent Vikings security blanket type tight ends, Kyle Rudolph and Tyler Conklin. Believe the Smith hype. It’s real this time.

8. Nwangwu Has a Role

Kene Nwangwu was drafted in the fourth round of the 2021 draft. He possesses world-class speed and was used almost exclusively as a kick returner in his rookie campaign. The running back is brilliant at that. However, the speed can and will be used on offense. Kevin O’Connell will find a way to include him in his gameplans, and signs of that will surface in camp. He gets competition for the snaps from rookie Ty Chandler, but because of his special team skills, he has already secured his roster spot. This year, he’ll be a true weapon as a backup for Dalvin Cook.

Jalen Nailor is a sixth-round draft pick. He enters a wide receiver room with stars Jefferson and Thielen. Osborn emerged as WR3. Behind them, a battle for the remaining spots will take place between Nailor, Ihmir Smith-Marsette, Albert Wilson, and Olabisi Johnson. In addition, the Vikings have a few more wideouts on the roster, and someone could surprisingly rise as a roster candidate. Nailor, a Michigan State deep threat, received the nickname ‘Speedy’ for a reason. The Vikings don’t have a designated deep threat, and Nailor will be that guy. He’s a strong candidate to become Mr. Mankato.

Vikings Shouldn’t Be Ruled Out of Sweepstakes for Star WR

Vikings Player Will Explode into Stardom

PurplePTSD: Brandin Cooks’ Pricetag, Muse in the House, No Tomlinson

Vikings Try Out New Punter. But Why?