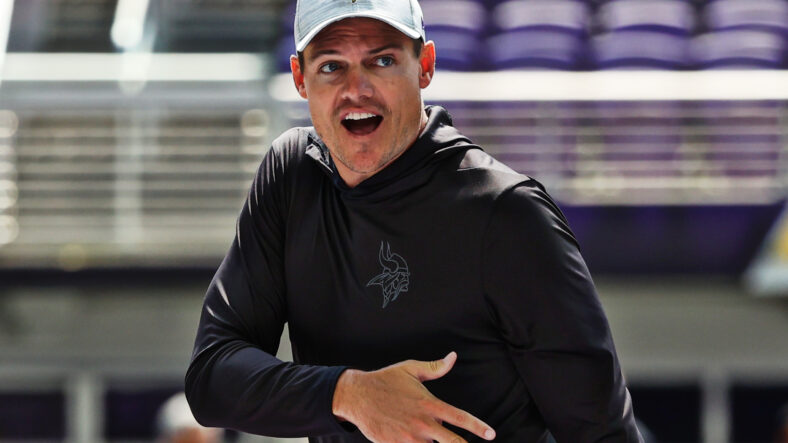 The Minnesota Vikings fell flat on Monday Night Football in Philadelphia for Week 2. They came out and watched the Eagles waltz down the field against Ed Donatel’s defense while seemingly never finding a way to recover. Comparing between the gameplans each week, maybe the middle ground between Zimmer and O’Connell is the place to live.

On Monday night against the Eagles Kevin O’Connell’s offense dialed up 46 pass plays to just nine rushes. Kirk Cousins completed just under 60% of his passes while also throwing three interceptions (two in the end zone). Despite a final score that had Minnesota losing by just 17 points, far less than it would’ve seemed based on game flow, Dalvin Cook was largely phased out of the action.

This couldn’t have been less similar to the game they played at home against the Packers during Week 1 when the Vikings won 23-7. Cousins threw the ball 32 times in that contest, with 28 rushes called, 20 of which were for Cook. Obviously the gameplan changes depending on the score and how things progress throughout the 60 minutes of action, but it wasn’t as though Minnesota was trying to sit on the clock against Green Bay. Ultimately, they won the time of possession battle by just under three minutes.

Whether by scheme, blueprint, or otherwise, the Vikings must find a way to spread the ball around to their skill position players. Justin Jefferson is going to be a target monster this season, and he should be, but he’ll also often draw the attention of the opposition’s best defender. That means Adam Thielen, Irv Smith Jr. (assuming he can catch), K.J. Osborn, and others will need to be involved through the air. It also means that there’s absolutely zero reason for Cook ever to see less than 20 touches per game.

Although the Vikings drew plenty of ire under Mike Zimmer for his antiquated offensive preferences, this isn’t a suggestion that every first down requires a run. Minnesota doesn’t need a draw on every third and long, and it’s fine to have a progressive approach under a better leader like O’Connell. That said, gameflow or otherwise, there should never be a game where Cook doesn’t carry the rock at least 10-15 times. As a skilled back with good hands, he should also be involved in the passing game whether split out wide or as an option out of the backfield.

Against the Eagles on Monday, Cook had just six carries for 17 yards. Cousins led the rushing game on two scampers for 20 yards. Jalen Reagor equalled Cook’s total on a single end around. Cook was also targeted in the passing game six times, but was able to haul in just four of the passes for 19 yards. It’s fine for a clunker like this to happen, but now everyone involved must look within and decide how to change it.

Often Zimmer would reverse course drastically with the offense when things went pear-shaped in hopes of providing a “see, I told you!” type of moment. Minnesota doesn’t need to hand the ball off 40 times against the Lions, no matter what the score is. They do need to involve Cook substantially more, though, and make Cousins look beyond his first read. The Vikings job was an exciting one because of the skill position players available to an offensive-minded coach.

Balance, better clock management, and progressive thinking in critical situations is enough to set O’Connell up in a stronger situation offensively. Week 3 against Detroit gives him an opportunity to put a better foot forward.

Rental Market Investment in the USA