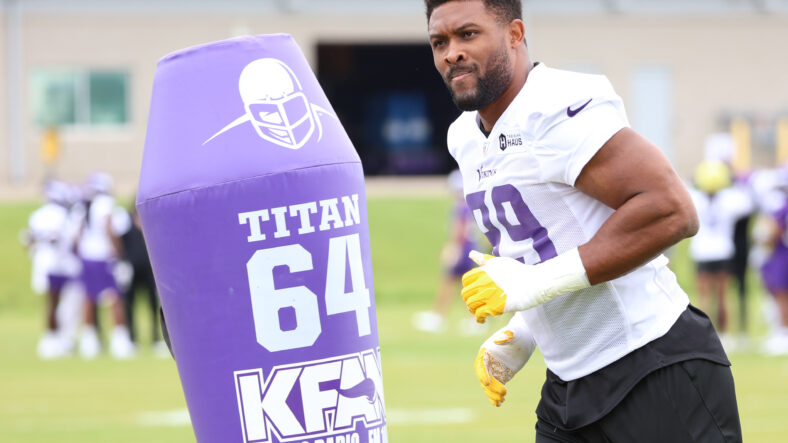 A dominant edge rusher is necessary to be successful in today’s NFL. Without consistently providing pressure from the outside and setting the edge against the run, defenses can’t function. That’s why the best players at that position are getting paid a lot of money. The Vikings, for example, pay the edge rusher Za’Darius Smith and Danielle Hunter a combined $114 million over the length of their contracts.

ESPN asked more than 50 league executives, coaches, scouts, and players to form a ranking of the top-10 pass rushers in the NFL. In theory, the Vikings have two candidates. Danielle Hunter and free-agent addition Za’Darius Smith are two of the best in the business at rushing the passer. However, both recently dealt with injuries, which influenced their rankings.

The top player on the list is T.J. Watt from the Pittsburgh Steelers. His 2021 campaign was a special season, as he tied Michael Strahan’s single-season sack record with 22.5. What makes his season even more impressive is that he missed two full games and played some others hurt. His performances led to a unanimous Defensive Player of the Year award. Against the Vikings, Watt only played 36% of defensive snaps and did not record a sack against Kirk Cousins — unlike the following players on the list.

Myles Garrett dominated Rashod Hill in a Week 4 matchup with his Browns against the Vikings. The former first overall pick recorded just 0.5 sacks but hit Cousins four times. He led the league in pass rush win rate and was named First-Team All-Pro.

Third is Nick Bosa, just above his brother, Joey. The Vikings faced both in the 2021 season, and they both sacked Cousins once. The former Ohio State standouts belonged to the elite pass rushers in the NFL immediately after hearing their names called on draft day.

The star pass rusher of the Minnesota Vikings didn’t make the cut. He is not among the ten best edge rushers in the NFL per the ESPN list. However, he made the honorable mentions as one of five, and Jeremy Fowler, who wrote the article, quoted a few NFL insiders:

“Hunter is a top-10 rusher when healthy, but he has missed 26 games over the past two seasons. Still, he has 60.5 sacks in 85 career games. “A long-arm power guy. Greatest asset speed and length. Those things will always cause problems,” an AFC coach said. “I did not think he should be what he is. He certainly proved me wrong.”

The former LSU Tiger shows his dominance whenever he’s healthy. Unfortunately for the Vikings, that didn’t happen nearly enough in the last two seasons, and the defense fell apart without him. Hunter was drafted in 2015.

Between that season and 2019, the Vikings ranked first in EPA/Play in that timespan. In 2020, however, the year he missed, the team ranked 25th. He wasn’t the only thing that changed, as Anthony Barr got hurt early in the year, and cornerbacks Xavier Rhodes and Trae Waynes left in free agency, just like the other pass rusher, Everson Griffen.

The same dropoff happened in 2021. Hunter played the first seven games of the season and looked like his old self, despite missing the previous season. The defense ranked sixth in those games, per EPA/Play. Then he got hurt, and in the remaining ten games, Mike Zimmer’s defense ranked 23rd. Hunter has an incredible impact on the defensive unit in the passing game and against the run. In the seven games, the star defender recorded impressive six sacks and six tackles for loss.

Like Hunter, Za’Darius Smith dealt with an injury in the 2021 season. He played 18 snaps in the opener against the New Orleans Saints and missed the rest of the regular season. The Packers pass rusher returned in the postseason and played 19 plays against the 49ers. The game resulted in a loss for his team, but his defense, including one sack from him, didn’t allow a touchdown. From now on, he’ll wear the purple jersey and face his former team twice every season.

Behind the duo of star pass rushers, the Vikings’ depth is problematic. D.J. Wonnum, Janarius Robinson, and Patrick Jones are still young, but none of them show enough yet to be trusted as impact players in the NFL. If the two stars can stay healthy and return to their old form, the Vikings’ defense has a chance to be good. If they can’t, however, the defense could be one of the worse units in the NFL once again. So far in the offseason workouts, Hunter and Smith appear to be ready and back to 100% for the upcoming season.

When is sanitary history too ripe for the jury?

Explained: State of the Vikings thru 6 Games

Did the Vikings Win the Trade Deadline?

VT Breakdown: A Dream Bye Week for the Vikes