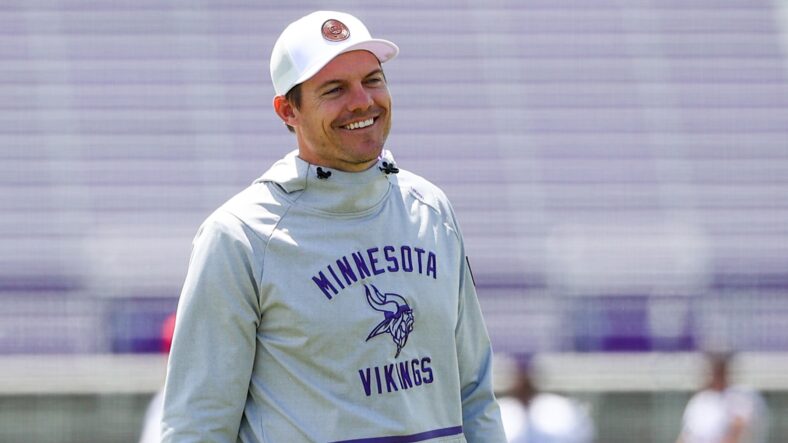 Minnesota Vikings head coach Kevin O’Connell is in a fuzzy spot. First-year head coaches, especially those as young as O’Connell, are expected to show promise and an upward trajectory during their maiden voyage.

O’Connell, like his peers, most do that and reach the playoffs — perhaps needing to win a postseason game, too.

If the ex-Los Angeles Rams offensive coordinator cannot guide Minnesota to the postseason in Year One, he won’t be terminated. Those are not the stakes. But for the current roster makeup, O’Connell’s Vikings must shed the stink of mediocrity emanating from the last two seasons. The only way to do that is to cease seasons in the ballpark of 8-9 that beset the franchise in 2020 and 2021.

Why? Because Kirk Cousins is the quarterback and the Vikings arguably have a roster worthy of playoff contention. A team cannot employ Cousins, Justin Jefferson, Adam Thielen, Dalvin Cook, Eric Kendricks, Danielle Hunter, Harrison Smith, and Patrick Peterson — and classify an 8-9 or 9-8 season as “job well done.” Since the start of 2020, the Vikings have rostered similar personnel, resulting in a stale win-loss output.

O’Connell is supposed to be anti-Mike Zimmer. That is — young where Zimmer is old, offensive-minded where Zimmer preached defense everything, and pass-happy where Zimmer built a run-first organization. From the moment O’Connell was hired in February — after the shine of a Super Bowl championship — he is tasked with stylistically changing the Vikings.

The expectation for wins is no different.

Of course, the memory of Zimmer and his performance as head coach are sour for fans right now. Reports about the team’s culture in the aftermath of his departure are unflattering — hardnosed, cold to the touch, and stubborn. Yet, once upon a time, the Vikings were a winning program under Zimmer. The descent into win-loss neutrality is new. Minnesota was the NFL’s seventh-best program from 2014 to 2019. Then, the 15-18 (.454) record over the last two years ensued. Folks remember the bad (or mediocre) as it is seared into recent history.

O’Connell can’t foster another mediocre season and maintain the same roster. The QB1 would be skewered for “another ho-hum season.” Suppose the Vikings somehow have the worst defense in NFL history. It won’t matter. Cousins will be blamed. His detractors will assert something to the effect of, “At $35 million, he should be able to take a team to the playoffs. Everyone else at that price tag does so.”

That logic is false, but it habitually sticks to Cousins. Hell, that argument is already utilized.

Therefore, because the new general manager opted to keep the roster eerily similar to the 2021 team, O’Connell and Cousins must enter the postseason tournament and probably win a game. A victory in January would give the O’Connell-Cousins pairing legitimacy and enthusiasm heading into 2023, the final year of Cousins’ Vikings contract.

O’Connell’s assignment is rare. He inherits “the same team” that tunneled into even-steven purgatory. Kwesi Adofo-Mensah, who hired O’Connell, desired the incumbent depth chart was enough clay to mold for a shot at the playoffs.

To be clear, it’s not playoffs-or-bust for O’Connell’s job security in 2022. However, if Minnesota does not participate in the playoffs, O’Connell is likely to encounter a new quarterback soon after and hence a modified roster.

If you enjoy how the roster is constructed now, 2022 is very much a get-to-the-playoffs adventure for a first-year head coach.

How Huge Can Thomas James Hockenson Be for Minnesota?

After Rudolph to TB, 3 Big-Name Vikings from 2021 Remain Unsigned