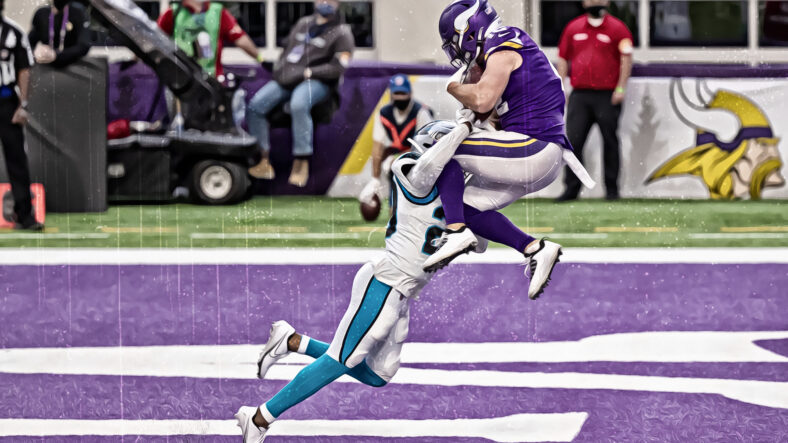 Once an undrafted free agent in 2018, Chad Beebe was a member of the Minnesota Vikings for four seasons. Now, the 28-year-old is bolting for Houston, signing with the Texans on Wednesday.

Beebe joins one of the most talent-deficient WR corps in the NFL, with existing players like Brandin Cooks, Nico Collins, and John Metchie III. Second-year quarterback Davis Mills is the team’s quarterback, and Beebe will fight to win a roster spot this September.

The Northern Illinois alumnus was a fan favorite in Minnesota for a couple of reasons. Vikings fans love “little engine that could” type players, and at 5’10” and 180 pounds, Beebe was precisely that. Additionally, Vikings enthusiasts adore “sons of former players,” so warming up to Beebe was an easy task. Chad is the son of Don Beebe, a Super Bowl-winning wide receiver — with nearly the same physical stature as his son — playing for the Buffalo Bills, Carolina Panthers, and Green Bay Packers.

Beebe teetered on fringe WR3-WR4 life with the Vikings, a suitable solution at WR for the Mike Zimmer brand of the franchise. He had proverbial “deceptive speed” and decent hands, making an imprint on special teams, too, in Minnesota. Beebe played in three seasons for the Vikings, tallying 26 receptions for 310 yards and two touchdowns. With the way he was revered by Vikings fans, however, one would think his numbers should be triple that statline.

Most notably, Beebe caught a heroic touchdown against the Panthers in 2020. He snatched a touchdown out of the sky with 10 seconds to go on November 29, 2020, at U.S. Bank Stadium. The score gave the Vikings a 28-27 victory. Minutes earlier, Beebe fumbled a punt return that should’ve been the dagger in the Vikings chance to win, but Beebe had other redemptive plans.

In 2021, Beebe injured his foot in the preseason and missed the entire regular season. Then, with a new general manager and coaching staff taking the reins this season, Beebe was not a priority to re-sign.

Another Running Quarterback for the Vikings

Kevin O’Connell Has Earned a Bad Game, But It Needs to Stick

The NFL’s Top QBs after Week 8