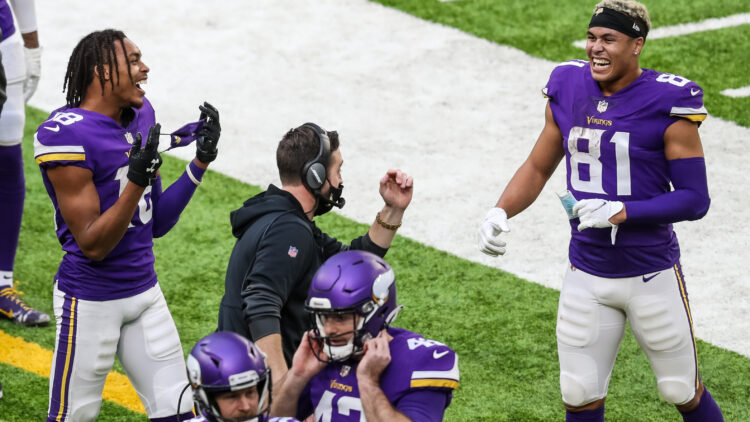 The Minnesota Vikings wide receiver room was always going to be one of the best units in the National Football League this season. That’s what happens when Justin Jefferson and Adam Thielen headline a group. After a second year of heartbreak for Olabisi Johnson, it’s time for another suitor to emerge.

Preseason football is a slog because it’s largely uninteresting, the results don’t matter, and it’s all about fringe players looking to make the team. Unfortunately for first-year head coach Kevin O’Connell, he was dealt the crushing blow that Olabisi Johnson would miss a second straight season due to an ACL tear.

Johnson was a 7th-round pick for Minnesota in the 2019 National Football League draft out of Colorado St. He drew six starts in his rookie year while playing all sixteen games. The following year saw just three starts, but a complete sixteen-game slate was again recorded. Johnson has never been witnessed as much of a breakout candidate, recording just three total touchdowns a 483 yards to date. However, behind K.J. Osborn this season, he was the veteran who could’ve been tabbed as the fourth wide receiver.

It’s now time for a pair of Vikings wideouts to step up for both O’Connell and wide receivers coach Keenan McCardell, immediately establishing themselves as go-to talents.

Last season the Vikings drafted Ihmir Smith-Marsette in the 5th round out of Iowa. Seen as a speedster, Smith-Marsette was expected to contribute on special teams and potentially work himself into the offensive gameplan. He’s now been given a golden opportunity to make that happen and present a skillset unlike two of the three pass-catchers in front of him. Smith-Marsette turned in five receptions on six targets while converting two into touchdowns. He shouldn’t be seen as a limited package player this year and could now get expanded run.

Then there’s the 2022 draft-darling Jalen Nailor. Taken out of longtime powerhouse Michigan State, Nailor was a 6th-round pick that has always been seen as a player capable of cracking the roster. Removing Johnson from the decisions to be made ahead of him, he could be utilized in offensive gameplan packages rather than a limited special teams role. Nailor may have been ticketed for the practice squad, and while this enhances his chances, it also thrusts him into a situation where expectations have risen.

When signed to take over for the Vikings, O’Connell was heralded as an offensive mind that would utilize the Vikings skill position players. Minnesota’s wide receiver room may have lost some of its floor with a predictable veteran, but the ceiling rises with two exciting talents looking to prove themselves. Can Smith-Marsette and Nailor rise to the occasion? Opportunities may be limited, but it will be on them to prove what they can do with what they’re given.

So, Is Kirk Cousins Back?

Vikings May Have Rude Awakening for Patriots