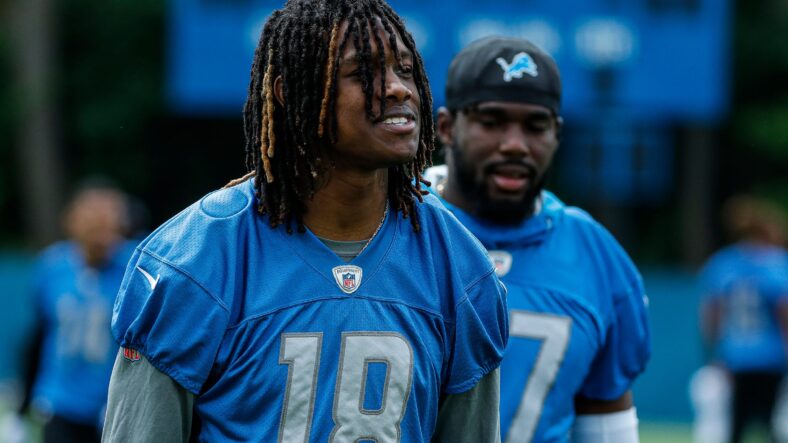 Do you remember when you lost your mind because the Minnesota Vikings traded their 12th overall pick to the Detriot Lions, gift-wrapping WR Jameson Williams to a division foe?

Well, Williams won’t be ready for the start of the 2022 season.

The Lions, a team forecasted to win six or seven games in 2022, are “playing it safe” with their young wideout, shelving him early in the 2022 campaign. Wiliams is recovering from a torn ACL.

According to ESPN Jeremy Fowler, Lions GM Brad Holmes said about Williams, “We’re going to be very smart with him. He’s in a good place right now. It’s not going to be Week 1.”

Back in April, the Vikings had a trigger finger on the 12th overall pick but sent the selection to Detroit, who needed a game-changing WR to complement the upstart Amon-Ra St. Brown. Minnesota could’ve drafted “sure thing” safety Kyle Hamilton from Notre Dame but instead rolled the dice on a run-of-the-mill trade with Detroit. In the end, this was the trade haul:

Detroit isn’t expected to contend for a division crown or the postseason in 2022, but stranger things have happened than the Lions finding a pathway to success. But, out of the gate, they’ll embark on head coach Dan Campbell’s second voyage without Williams, who figures to be a mammoth part of the offense in time.

For now, these are the Lions WRs:

And for at least another year, quarterback Jared Goff will distribute the ball, hoping to rekindle some of his 2018 magic that has seemed to die in the last three years. Per EPA/Play, Goff was the NFL’s 25th-best passer in 2021. Other QB metrics suggest Goff was around the 26th-best.

Per usual, the Vikings play the Lions twice in 2022, and Williams may or may not be ready for the first meeting. Minnesota hosts Detroit in Week 3 at U.S. Bank Stadium — or 44 days from now.